We Are Finally On Our Way 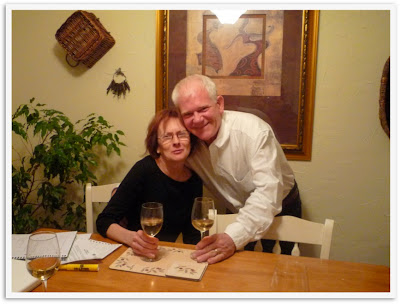 The big day has finally arrived and we fly out to Quito this afternoon. Last night Mom and Bob drove in from Flatonia and on the way hit a massive rain storm with hail. They had to take an alternate route to somewhat avoid the storm and ended up getting lost. By the time they got to the house Mom just had one thing to say.. “Do you have any wine” They were both quite frazzled and glad to be at their destination. I opened a bottle of wine and we talked about our plans the next day, made more lists and enjoyed a good home cooked meal that Rod’s mom had prepared.

The six of us had enjoyed conversation and each others company and before we knew it the time had slipped away from us and we decided we had better turn in and try to get a good nights rest. I laid there for what seemed like an eternity with my brain going about a hundred miles an hour wondering what I had already or would soon forget to pack. I finally drifted off to sleep and at 7:30 was awoken by Dad’s dog Pepper jumping all over the bed. 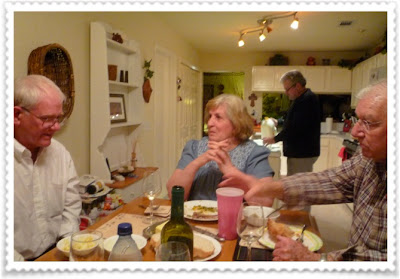 Rod cooked us all a good breakfast and we started tackling our lists. Our flight left at 4:00 pm and we needed to be at the airport by 2:00. After we cleaned up the dishes and ourselves it was off to the drugstore to find Mom a pair of reading glasses. Before she left Santa Fe she had gotten a new prescription lens in her glasses and realized to late that the prescription wasn’t correct. It was going to be impossible for her to read maps and that is not a good thing when you are in unfamiliar territory. We couldn’t find a pair of suitable readers, so Bob and I said that we would read the maps and any other fine print for her.

Next it was off to Kinkos to make copies of our drivers licenses, credit cards and to print out our airline tickets. Usually I bring a portable printer with us when we go on the road, but we were already packing so much stuff that I didn’t really want to fool with it. Now I’m kind of wishing I had because I had to transfer everything to a flash drive and then take it to Kinkos to print it out.

We returned home and started madly packing those last minute items and deciding what needed to go where. Dad decided that we should leave even earlier than planned in case there was a wreck on the freeway, so now it was double time and we looked like a bunch of chickens with our heads cut off.

Rod’s Dad, Bob, Mom, Rod and myself all piled into Bob’s Excursion and headed off to the airport. We made it in really good time, but once we arrived at the airport there was mass confusion over which terminal we needed to be at. It was determined before we left the house that terminal E was for international flights, but once we got to the airport there were signs pointing to both terminals D & E and they both had international flights. Poor Bob was driving and we were all shouting directions to him at the same time only none of us were agreeing. Bob finally stopped in the middle of the road until we could all make up our minds.

Once we got to the correct terminal we unloaded the car and said our goodbyes to Dad who was probably glad to see us go by that time. We wheeled our luggage into the terminal check in and got our boarding passes. So far so good. We got in line at security and began to unload our jackets, shoes, laptop, bags, etc. into the bins. I was the first to go through and of course as I waited patiently on the other end of the conveyor belt to retrieve my belongings I heard the x-ray technician call out to another that she needed someone to come look at something. Well you know that something had to belong to me. The security person first carried my laptop off for testing. What the heck? I have never heard of that. I was wondering what kind of test they run. Were they looking for secret information? Next my carry on bag was pulled to the side and opened up for inspection. Oops I forgot to take my liquids out of my bag and put them into the bin.

Finally we got through security and put our clothes back on and headed towards our gate. We were approx. two hours early so we decided to grab a bite to eat. Of all the luck there just happened to be a Pappadeauxs right next to our gate (Yipee). We sat down and Rod and I ordered some drinks and Mom and Bob proceeded to order two glasses of wine. The waiter explained that you could order a bottle instead and if you didn’t finish it, he could cork it and you could bring it on the plane with you. Well that sounded like a super idea since purchasing a little bottle of wine on the plane isn’t cheap. We had a great meal and yes I ordered the Greek Salad again. Needless to say the bottle of wine never made it on the plane. 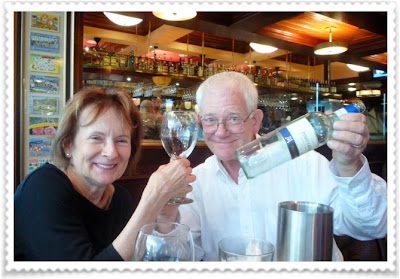 It was now time to board the plane and begin our adventure.
at 10:21 AM