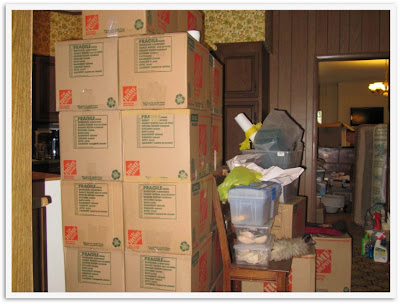 Boxes Piled To The Ceiling At The Ranch
In August my Mother sold her house in Santa Fe for very close to her asking price and a cash offer to boot (very amazing in this economy). We all breathed a sigh of relief as we were beginning to have doubts that the property would sell anytime soon, especially for so close to what she was asking.
After the house was closed on, the buyers gave my Mother a mere 3 days to finish packing before they took possession of the house. Bob flew up from Texas to help facilitate the move. All the while Mom was still working, so they were madly packing in the evenings and on the weekends. Mind you it was a 600 sq. foot house, but there was still a lot of stuff to pack. Mom had decided to start preparing for her eventual move to Ecuador and was cataloging, photographing and bubble wrapping as she packed.
On the 5th of August Bob left with a truckload of boxes and one of the cats and headed to the ranch where Mom would eventually be living as soon as she finished out her two weeks at her job. The next property to go on the market will be the Ranch, but only after some major renovations take place.
We will all miss Santa Fe, but as Mom says “It is the start of a new chapter and time to reinvent ourselves.
It has really been an amazing week for me. I have been busy selling on ebay this month. It turns out I sold three hand painted birdhouses out of my ebay store and when I went to send the invoice to the buyer the next day it kept popping up as an International shipment. I couldn’t figure out why it was doing this because it is very rare that someone will make an international purchase without first inquiring about the shipping costs.
It finally dawned on me that this buyer was indeed an international shipment and loe and behold when I looked at the invoice I couldn’t believe my eyes. My birdhouses were going to Cuenca of all places. I immediately emailed the buyer and let her know that we had been to Cuenca and we had purchased a property there. Long story short, we have decided to meet while we are there. It turns out Carmita (the buyer) is a native Ecuadorian and has lived in Cuenca all of her life. Her written English is very good, but she has warned me that her spoken English is a little broken. I have no fear we will do the best we can to converse through broken English, Spanish and the old stand by hand gestures. 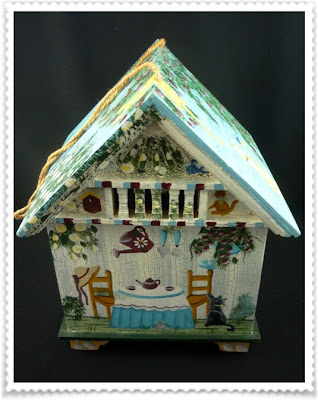 One of the Birdhouses Going to Cuenca

As it was the birdhouses were going to cost $50.00 to ship to Ecuador so after several emails back and forth we decided that it would be best to ship the Bird houses to Florida where Carmita’s sister is visiting and she will carry them back to Ecuador with her on the plane. I’m hoping that they will be in Ecuador by the time we arrive. I would love to see them hanging in Carmita’s garden.
at 4:58 PM