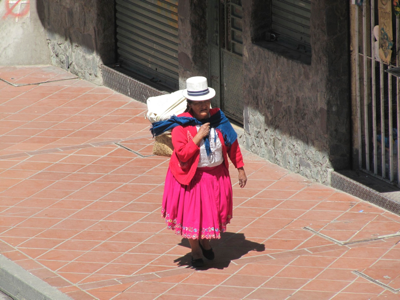 A typical day on the street, that is the title of this weeks entry. I decided I had better start practicing my Spanish, especially after last Saturday. Carlos had a tour that weekend, so Mom Rod and I were left to our own devices. I thought that my phone battery had gone dead, so the first order of business was to find someone that could replace my battery. After two taxi rides and using the best Spanish I could, but to no avail, I finally became highly frustrated. Especially when I realized I had asked for a car battery instead of a phone battery at one of the stores. Luckily my phone decided to repair itself saving me any further frustration.
Friday afternoon we were at the house doing our typical daily routine of inspections, meeting with contractors and expressing our visions to the architect. The house is so dusty and dirty these days that you have to step out to the front balconies or the roof frequently just to catch a breath of fresh air.

On one of these such breaks, I decided to snap a series of photos depicting the daily life of our street below. Friday was the perfect day to accomplish this as the day was beautiful and the street was quite busy with activity. 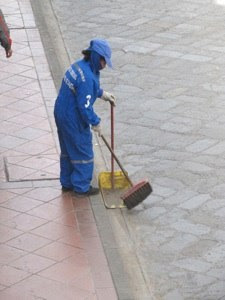 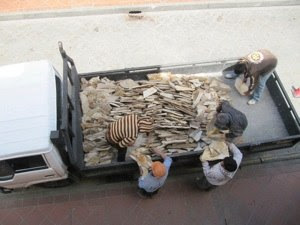 The Workers Unloading A Delivery Of Stone For our House 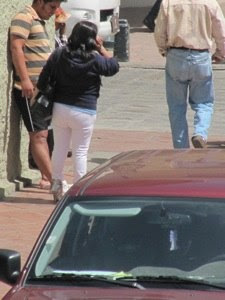 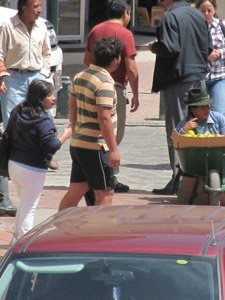 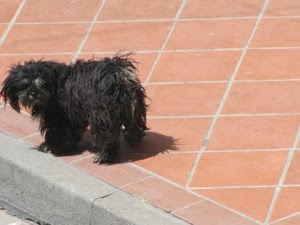 Mom & I Have Nicknamed This Dog “Naughty Dog”. He Is Always Escaping From His Owners And Running The Street. When The Children Try To Retrieve Him, He Barks As He Runs From Them. He Is So Matted It Looks Like The Street Sweeper Could Use Him To Clean The Streets 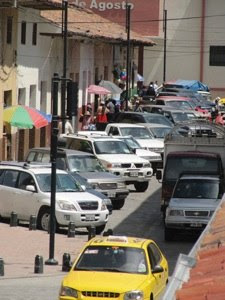 Traffic At The End Of Our Street Near The Market 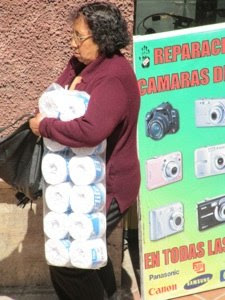 A Lady Doing Some Shopping. There Is An Abundance Of Little Shops That Sell Toilet Paper 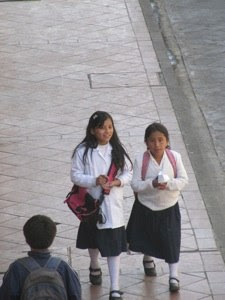 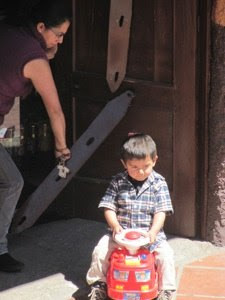 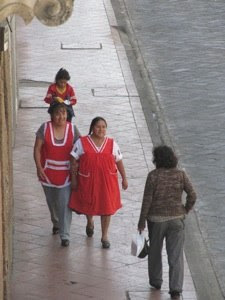 Two Shop Or Restaurant Employees Walking With Their Aprons On 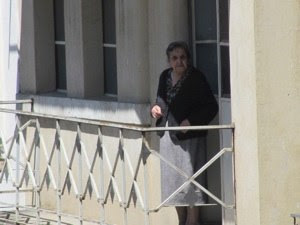 A Neighbor People Watching From Her Balcony 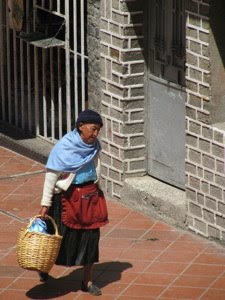 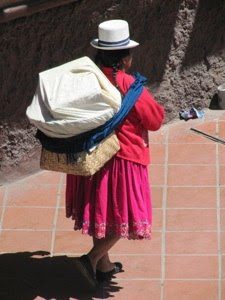 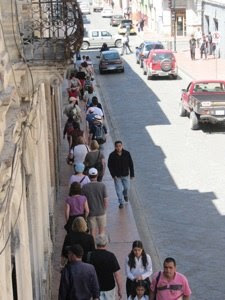 A Large Tour Group Of What Looked To Be Americans 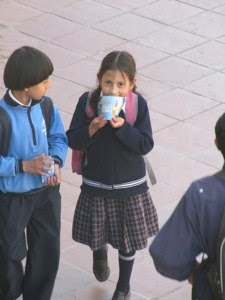 Two School Children Enjoying A Snack On The Way Home

There has been a major change in the plans now. Mom and I are departing Cuenca leaving Rod behind for an additional five weeks. Unfortunately my computer has to stay with Rod so that he can continue to stay in contact with the businesses and us. Blogging during this time will be a challenge if not impossible without my computer, but please stay with us as the stories promise to be good and the wait will be worth it.
at 8:16 AM 0 comments 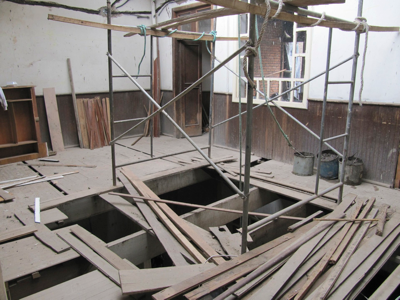 According to (NewsCore) - BIRMINGHAM, Ala. -- An astounding and record-breaking 312 tornadoes were recorded in America's South over one day according to preliminary estimates released by federal authorities Monday.
The National Oceanic and Atmospheric Administration (NOAA) said the tornadoes were counted over a 24-hour period from 8:00am ET on April 27 to 8:00am on April 28, during an outbreak of wild weather that left hundreds of people dead. The number far exceeds the previous record of 148 twisters in 1974.

There were also a remarkable 362 tornadoes tallied during the entire storm outbreak that cut through seven states from April 25 to April 28, the NOAA said. April also set a record for most tornadoes in a single month -- more than 600, compared with the previous record of 542 in May 2003.

The NOAA put the death toll from the disaster at more than 350 -- the highest from tornadoes in the US since April 5-6, 1936, when 454 people were killed, mostly in Mississippi and Georgia.

Last month’s storms cut a path of devastation across the South, leaving several hundred people missing or dead and thousands injured. We were some of the lucky ones and managed to escape injury and loss, but our hearts and prayers go out to those who have suffered at the hands of this great tragedy.

In all of the years that we have lived in Alabama we have never witnessed such ominous weather. Early Wednesday morning we lost power in our part of town and by the end of the day all of Huntsville and most of the outlying areas were literally in the dark.

TVA remains in a Transmission System Alert due to large area damage. More than 300 poles or steel structures were damaged in the storms, resulting in more than 90 large transmission lines being out of service, including a large portion of the 500-kilovolt and 161-kilovolt lines serving North Alabama and Mississippi.

As soon as Rod and I realized that power was not going to be restored any time soon, we all evacuated to Tennessee along with our dog Buster where we spent three nights in a hotel about 50 miles from home. The drive to Tennessee was incredibly slow as there was an oil tanker that had been turned over on the highway and caused  a big delay in getting out of town. Any gas station that had a generator and was able to get up and running had lines of cars waiting to get gas, sometimes two hours long. There was a dusk to dawn curfew placed on our city for a week.

Many businesses including ours were shut down for a week or more. All, but a few restaurants and grocery stores lost all of their food not to mention the lost revenue. The restaurants and grocery stores that were lucky enough to have a generator probably did more business in that one week than they do in a normal month. The one Mcdonalds that was open in our town had a line out the door and you had better be prepared to wait thirty minutes to get your order.

Sunday we decided to head home even though we knew there was still no power, but hoping that we would soon have the lights back on. We were determined to open our Huntsville Business Monday morning with or without power. Monday came and went and still no lights at home or the business.

We checked back into a hotel, but this time we were able to get a place in Huntsville as many of the homes had power restored and people were slowly returning to their daily routine. Luckily power was restored late Tuesday afternoon and we were able to return home just days before we were to depart to Texas where we would catch our flight to Ecuador.

Alabama wasn’t the only place there was devastation. It looks as though a few tornadoes went through the Ecuador house as well. The plumbing and electrical is going in now and the workers have literally had to remove the whole ground floor in order to level it and lay water lines. The walls will be trenched in order to place the wiring and then closed back up again. Things are beginning to move quickly and we are making decisions daily. 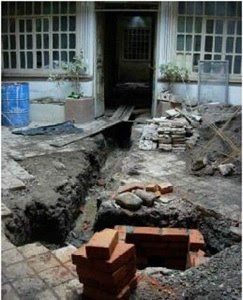 The Trenches Being Dug For The Water Lines

On May 10th we escaped the devastation of Alabama only to arrive at the scene of mass destruction at our house in Cuenca. The floors in all of the rooms are missing because they were used for the ceilings and walls are being replaced where others fell down. 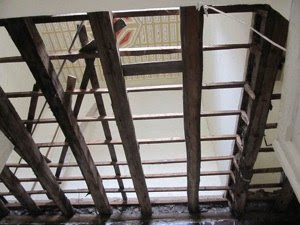 A Floor/Ceiling Of One Of the Rooms 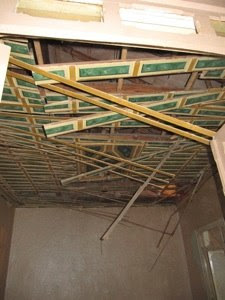 The Ceiling Of Our Bedroom Coming Down 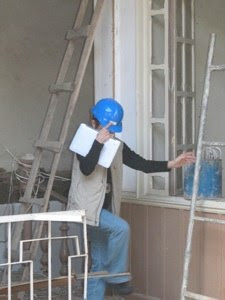 Mom Forges Her Way Through The Rubble 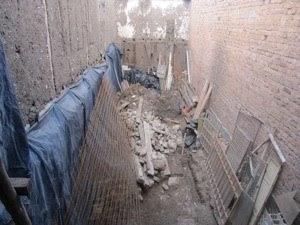 The Back Garden Area 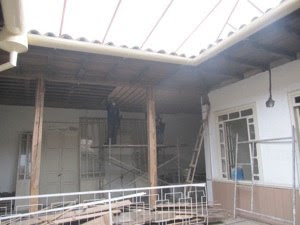 The Picture Is Hazy Because Of All The Dust 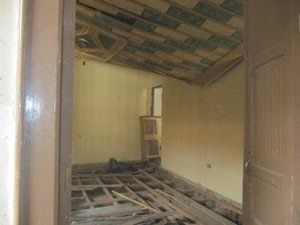 In spite of everything we are very pleased with the progress and the workmanship. It is exciting to see the house coming together now. Over the next few weeks our days will be filled with decisions, regrets, tension and compromise as we plan and design each and every space. 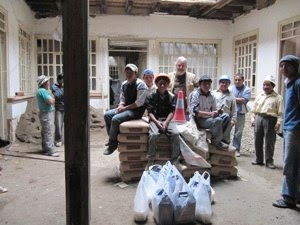