Ecuador In A State Of Crisis? 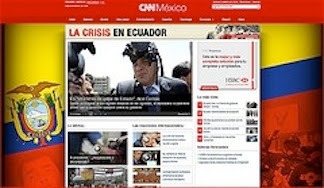 As many of you back in the States have already read or heard, Ecuador announced a state of emergency today. The sum of the matter is that the police and some of the military went on strike in protest to a cut in benefits. Many of you  emailed us inquiring as to whether or not we were O.K. We thank all of you who thought of our well being, but rest assured there was never any danger.

Most of the upheaval took place in the larger cities of Quito and Guayaquil, while Cuenca remained relatively quiet other than a few protestors. We just used common sense and a little precaution and we were fine. At one point the major airports were shut down and we were a little concerned we may not be able to make our flights home, but that proved to be a false concern as the airports were up and running the very next day.

If you would like to read what I think is a very accurate description of the days events please click on the link below and you will see that it was really a very minor incident with a lot of theatrics and misinformation. We were interested to see what the U.S. had to say about the strike, but there was actually very little news to be found from home. We can only imagine that the news media got a hold of the story and blew it out of proportion causing a lot of unnecessary concern. Retire in Ecuador

This morning we moved from the Kookaburra hotel to our present hotel the Casa Del Aguila. Not only is this a beautiful hotel, but it has given us many ideas for our house as it closely resembles many of the features that we have or will have. Prior to leaving the states, we had made reservations at the Casa Del Aguila and had booked a triple room for Mom, Rod and Myself. The room unbeknownst to us was right next to a rooster coop and the first night was quite noisy. It is a myth that roosters only crow when the sun comes up, I am here to tell you they crow at all hours of the day and night. Rod was ready to make rooster soup. Fortunately the staff was very understanding and moved us to two lovely interior rooms of the hotel at no extra charge. 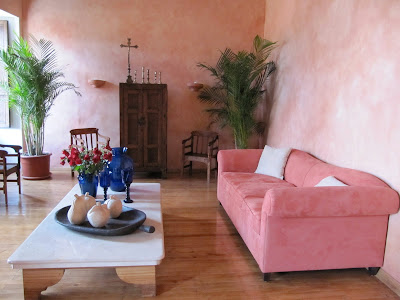 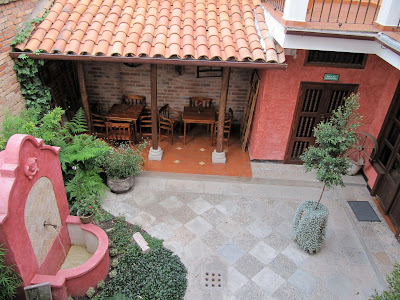 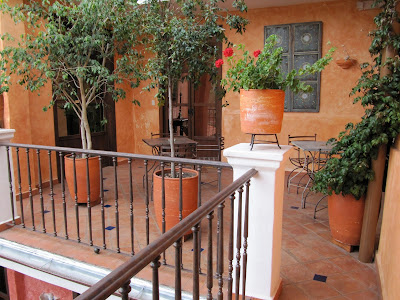 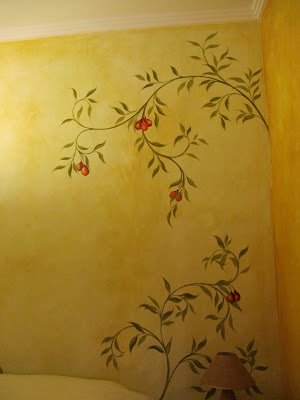 Faux Painting On Our Bedroom Wall

Meanwhile back at the house the workers are hard at work demolishing and disposing of the remains of the apartments that were in the back of the house. Some of the things that we were tearing out of the back portion of the house, Rod gave permission to the workers to take. They were so excited that you would have thought it was Christmas. They each had their own little pile in the house and periodically through the day a truck would come by and pick up the treasures and carry them to who knows where. The foreman seemed to always get first pick and he managed to snag most of the big pieces of furniture. 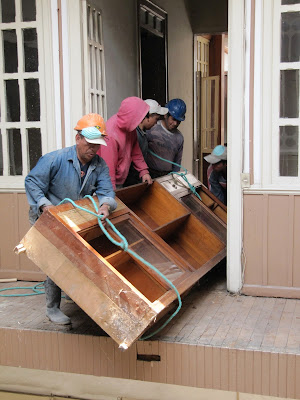 Workers Lowering A Huge Sideboard Over The Second Story

Pretty soon Rod figured out how to use this to his advantage and had Carlos tell the workers everything they were free to take. Well furniture, toilets, sinks, stove hoods and who knows what else started flying out of the house. In exchange we were able to get rid of a lot of things we didn’t want and at the same time feel good that someone else was getting some good use out of it or even some money if they were able to sell it. 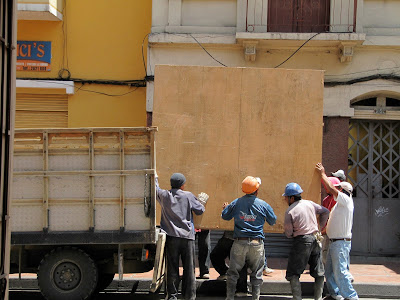 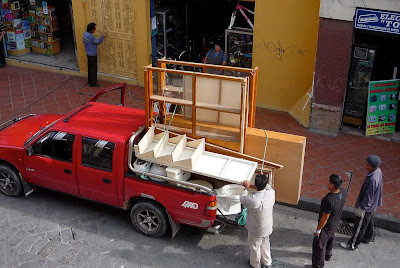 Another Truck Load Of Stuff

As Mom and I approached the house this morning we had to climb over a huge pile of rubble just to get into the house. Soon after we arrived a dump truck pulled up outside and the workers began to shovel the rubble into the truck throwing shovelfuls over the side until there was not an inch of space left in the bed of the truck. We were all amazed at the process and wondered why they didn’t just use a Bobcat, apparently this is the way it has been done for years and probably will continue for many more years. Most of the labor is manual and you see very few power tools. 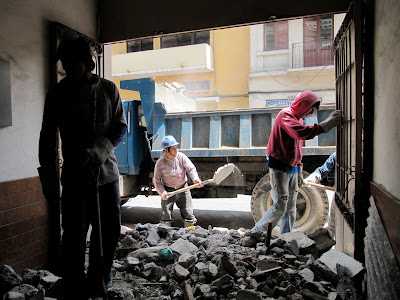 Piles Of Debris In Our Doorway 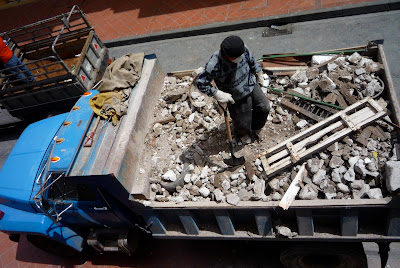 The Dump Truck Full Of Debris

An Old Wooden Rolling Pin We Found In The House 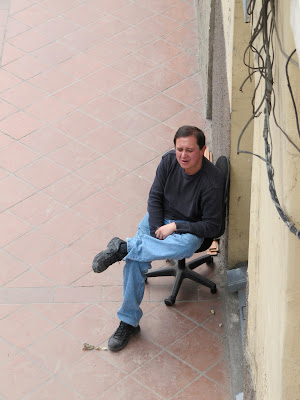 One thing we did find out during the demolition of the house was that what we thought were chicken coops in the back courtyard were actually Guinea Pig pens. Guinea Pigs are a delicacy in Ecuador and they are called Cuy. They are usually roasted over a spit pretty much intact with head, teeth and all. This is one thing you will not see me trying and I was really glad to see the pens go.
at 8:34 PM 2 comments