A Visit To The Emergency Room

What would one of our trips be without a little adventure? This particular trip, Mom arrived in Ecuador with a cast on her arm. Some weeks ago back in the States, she had fallen in a restaurant or as she calls it a "Greasy Spoon". Apparently the grease made it off the spoon and onto the floor, at which point Mom stepped in it and went sliding. She tried to break her fall with her hands and ended up fracturing her wrist. Long story short, she came to Ecuador with a cast and instructions to have the cast removed about a week after she had arrived.
A couple of days ago we decided to make a visit to the Emergency Room/ Clinic to have the cast removed. With Juan, our English speaking guide in tow, Bob, Mom and I drove to the ER. Mom was happy to be getting her cast off and of course all the while, I was thinking this would make great blog material. As soon as we arrived at the ER, we were told to wait in the very modest, but empty waiting room outside of the double doors.
I immediately whipped out my phone and began taking pictures. When the nurse came to get Mom she told us only one person was allowed into the room besides our translator and being the opportunist I am, I immediately jumped up and started towards the room. Poor Bob was left standing in the waiting room saying "But I'm The Husband"... No matter, I wasn't going to miss a good story.
The nurse led Juan, our translator, Mom and Myself back to a curtained cubicle and told Mom to lie on the exam gurney., The nurse then covered Mom with a blanket and pulled the curtain half way closed as she left to retrieve the doctor. It was immediately apparent that Mom was apprehensive and as she lay of the gurney stiff as a board. We tried to lighten the mood with idle conversation, but that didn't work to well. Mom looked as though she was waiting to walk the plank to the hungry crocodiles below.
Unlike the ER in the States, very soon after we arrived a kind, gentle, distinguished looking doctor arrived with the nurse close behind. His name was Dr. Alvardo and I guess he saw the look on Mom's face and decided to let Bob into the room as well. Doctor Alvardo explained that he would have to cut the cast off, he then proceeded to show Mom the saw he was going to use. Mom immediately turned as white as a sheet as she had been told in the States that the cast would be cut off with surgical scissors. Doctor Alvarado turned on the saw to demonstrate and I thought Mom was going to pass out. I was starting to feel just as nervous, but I was able to maintain my reporter persona and started snapping away.
By this time, Bob, myself and our translator were all busily talking, just trying her expression made me want to pass out. A few minutes later, Doctor Alvarado had cut the cast in two places, he then used some sort of forceps to pry the cast off. By then the mood had lightened a bit and we were all able to breathe. Mom said that the staff must have thought she was someone very important to have such an entourage.

Next it was off to the X-ray room. The translator was allowed in, but Bob and I were told to wait outside where we observed the goings on of the Clinic/ ER. I have to say it was the quietest ER I have ever been in, we did not see a single patient. Our translator told us, the best time to go to such a place is during Siesta, I thought to myself "Do people not get hurt during Siesta"? Apparently not. We did see several nurses wearing the little paper hats like they used to back in the 50's in the States. We also saw a female doctor in a mini skirt that was shorter than her lab coat and high heeled boots, too funny. We peeked into some of the rooms where the patients would be and found them to be very basic. 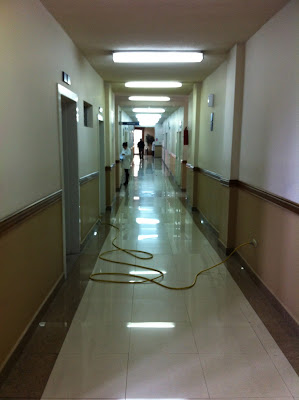 When Mom got out of X-rays, Doctor Alvarado had good news that her wrist was almost  completely healed and with some exercise and hot water soaks she would be good as new. Doctor Alvardo held the X-rays up to the window, so we could all see what he was talking about.

With the ordeal over, we headed to the cashier to pay the bill. They did accept credit cards, but it took a while to process. The total bill with X-rays was $110.00 and Mom was on her way with prescription in hand and minus a cast. Hopefully I will never have to grace the doorstep of an ER, but if I do I now know what to expect.