Keeping Our Eye On The Prize

I write this entry with much apprehension. As soon as these words are put to cyber paper, I wonder will the sky fall? Will the sea rise up and swallow us into it’s dark depths or will the bowels of the earth erupt and sweep us off the face of the planet?

I was beginning to think we would never see this day actually come, but I say with caution, I think we now see a light at the end of the tunnel. It turns out this is not the headlight of that out of control train that has been on the verge of derailing ever since we started the process of renovating a property in a foreign country.


We are now at the point that we are keeping our eye on the prize and staying focused as the house renovation nears an end. This project has no doubt been a challenge and one that I’m sure none of us would choose to do over again as we did this one.


Who in their right mind would buy a property on the last day of their first trip to a foreign country? To make matters worse a fixer upper. Who would remodel a property in one country while living in another without even speaking the primary language? Who would take on a project with no plans or no budget in place?

Looking back, I think Ecuador had a spell on us when we made the commitment to renovate this property. None of us were thinking rationally, even after we had returned home, before we finalized the deal, we still thought we were making a sound decision. Personally I think there was something in the water.


So many of our friends and family have voiced their concern and wonderment over the course of the project. All the while I’m thinking that they’re just too nice to come out and say “Are you out of your mind”? Looking at it through their eyes I can’t say I blame them. I can honestly say that at one time or another probably each one of us has had the thought cross their mind that a huge mistake had been made.

Don’t get me wrong, hindsight is 20/20 and I would say that we would have done a lot of things differently, but in the end no regrets. We have learned so much along the way, met many wonderful people and had so many experiences both good and bad that we can reflect upon and yes even laugh about.

One of the funniest memories I have of this project was when we met with one of the earlier architects to discuss a plan. We met at the house that day and it was a particularly dreary day… cold and wet. We were sitting in the first courtyard, which had the old glass roof over it. Many of the glass tiles were missing and the rain was pouring in on us as we stood there freezing to death while trying to carry on an intelligent conversation with the architect. As if things couldn’t get worse, an airplane flew directly overhead drowning out our conversation. It was one of those moments when we questioned our decision to take on such a huge project and all Mom could say was  “Swell.” Now that the house is tight and weatherproof and all of the outside noises are muffled, we can laugh about that day.

Yes we have had our ups and downs, battles amongst ourselves as well as with ourselves. I wouldn’t trade the experience for anything.We have been so fortunate to have Carlos and Esteban our architect to help steer this ship. It took us several architects, countless blowups and many disappointments along the way.  Sometimes the stress and frustration got the best of us and we didn’t show our best side, but thanks to our crew we have now made the dream a reality.

No doubt, even when the project is finished, it still will not be finished. Just furnishing this huge house will take an enormous amount of time, money and effort, but in the end it is our intention to create a cohesive environment that is as diverse as our personalities, a place that maintains the integrity of the house while at the same time expressing our individual personalities.


Would we do it again? Maybe so, but if we did, so many things would be done differently. We would have budgets in place, we would have our crew in place and most of all we would have proper plans drawn up, something that was foreign to this project. If we had plans in the first place, the project would have run a lot smoother and we would have lost a lot less sleep. 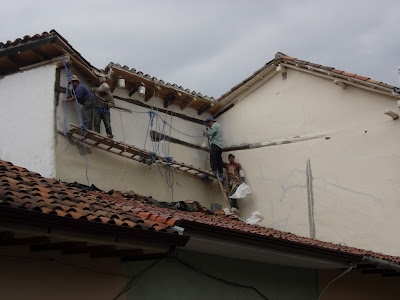 Finishing Touches On The Outside
Would I recommend that others follow in our footsteps? Definitely not, but I would not waiver from the firm belief that we should never sway from pursuing our goals. Always take the advice of others into careful consideration and never give up on your dreams. Our situation was a little different than most as we were the strength of four in the pursuit of one common dream. We were our own support group.


On an ending note, I would like to apologize for posting duplicate images on the entry before last. Rod brought it to my attention that I had posted several pictures twice in two different entries. No doubt the early warning signs of losing one’s mind after renovating a property in another country.