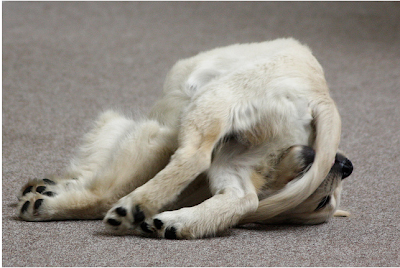 Photo by Daniel Davies
The last quarter of 2011 proved to be some of the most stressful months we can remember in a long time. Besides the usual holiday hustle and bustle, the Ecuador house renovation and keeping up with our online businesses, we decided to open our third automotive shop. Most of November and December were spent remodeling our new location, which had been a thrift store in its former life. Trying to turn a thrift store into a automotive repair shop is no easy task. Shortly after the holidays we moved our offices to the new location and are still trying to catch our breath as we recover from the mad dash at the end of the year. 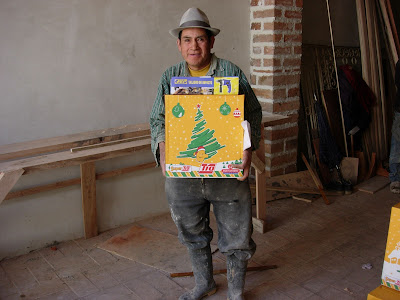 One Of Our Workers With His Goodies

One day Carlos sent us a photo of a typical New Years tradition that takes place in Ecuador. "Año Viejo" ("the old year") - the name refers to the puppet which symbolizes the Old Year. Every year on December 31st people in Ecuador are destroying and burning these symbolic puppets.

It just so happened that the workers constructed such a puppet in the house and they fashioned it after Miguel, our maestro. Apparently the puppets are made to resemble the elders and then at the appointed time, they are taken to the street and burned. This is a ceremony that represents the beginning of a new year, a fresh start. "Out with the old and in with the new."


Amazingly we survived the last three months and in spite of all the chaos, we were able to spend an amazing Christmas with our family in Texas. We are now open for business and completely exhausted. Rod has finally cried Uncle, promising to never open a fourth location. I want that in writing!

With the busy Holiday season behind us, we are now back to our chaotic normalcy. It is now time to put our focus back on the Ecuador house once again. My Mother and Bob have been trying to take up the slack with the decision making on the Ecuador project while we have been tied up with everything else. Great strides have been made over the past several months and we are actually able to see a light at the end of the tunnel. The project is now at the point that we don't need our architect as much and Carlos is running the whole show. Bob was not able to return in November as he thought he would, so once again we have been renovating completely through emails and Skype.

Several times a week, Carlos sends us pictures of the progress and stays in contact via email and Skype calls. Rod and I are now past the stage of worrying about every little detail. We have adopted the attitude of "C'est la vie,"  It is actually a liberating mindset for Rod and myself, we know that there is so much out of our control now. We will hope for the best and deal with any changes at a later date. It's amazing to me that we can relax now and not fret over every little detail. I just keep reminding myself that even if we had been on the job everyday, there would always be things we wished we had done differently. Maybe we're just practicing for a more relaxed way of life, always Mañana.


My Mother and Bob are still trying to get their visas and finally their residency. The process has unsurprisingly been very complicated with many set backs. We are hearing from many others that this has become the norm and not to expect a smooth speedy process. There are many horror stories out there as well, but hopefully we will be one of the happier stories. With the setbacks thus far, it is inevitable that the shipping container will not be put on the water for several months. The urgency of getting the house finished by the end of the year is a distant memory and we have now been able to take a little more time with the decision making process.


All four of us have made plans to return near the end of the month. My Mother and Bob at this point have just a few loose ends to tie up to obtain their six month visas. This will enable them to stay for two months this trip. Unfortunately Rod and I could only commit to three weeks as our new location is still in its infancy.

Over the holidays Rod surprised me with a two week cruise. In May, we will be flying to London where we will meet up with Rod's Sister and see the sites of England. We will then sail from London and make ports of call in Spain, France and Italy. Rod's sister is a seasoned cruiser, but this will be our first trip to Europe, much less on a cruise. We are very fortunate to be traveling with such an experienced cruise buddy and look forward to sharing the adventure. I suppose in May the blog will take a bit of a detour, but I will do my best to keep updates coming on the status of the Ecuador project as well.