A Day In Quito 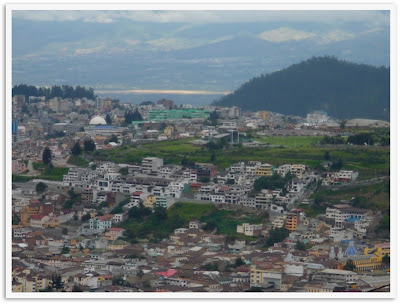 Our first night in Quito was rocky and had us questioning our decision to visit Ecuador in the first place. After several cups of coffee, a nice breakfast and some good laughs over the previous nights antics we were able to forget about the past and look forward to a new adventure. Our driver wasn’t going to pick us up for our tour of Quito until 3:00 that afternoon, so we decided to brave a taxi ride into the historic center of Quito and take in some of the sights. 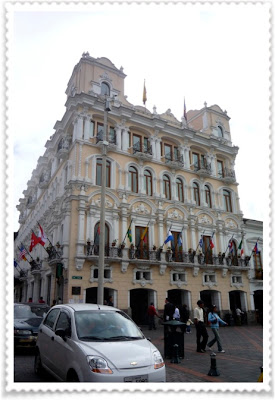 Government Building In Quito
After another frightening taxi ride, we set off on foot to do some exploring. We actually had no idea where we were going, but that didn’t stop us. The taxi dropped us off  near the Plaza which is a beautiful public park surrounded by some of the most amazing architecture I have ever seen. We just started walking taking in as much as we could and as we walked through the narrow streets and alley ways our senses were taken over by the amazing sights, sounds and smells that surrounded us. 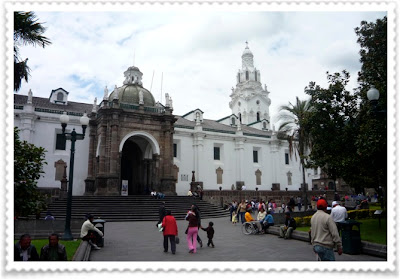 A Building Just Off The Plaza
We were absolutely dumbfounded by the beauty and the architecture that surrounded us. Everything we had read prior to going to Quito told us to get out of there as fast as possible and after the first night we were inclined to agree. This was not what we had expected at all and in spite of the language barrier we felt very comfortable and safe in this very large city. There were a great deal of uniformed police officers in the plaza and we were free to roam as we pleased. 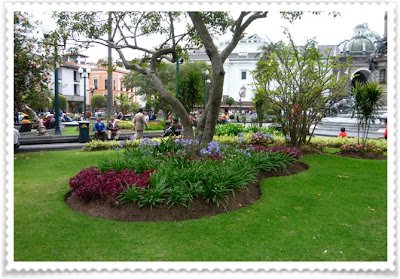 The Meticulously Manicured Grounds Of The Plaza
There were street vendors stationed in every nook and cranny of the buildings that lined the streets and they were peddling every thing imaginable. On one of the streets that we were walking on there was a small framed man carrying a washing machine and dryer on a dolly down a very steep hill. It was so interesting to watch how he carefully worked his way down the steep hill navigating through the crowds with that heavy load on wheels. I think the washer and dryer weighed more than he did. Apparently this is not uncommon and the standard way of delivering such goods in the city. 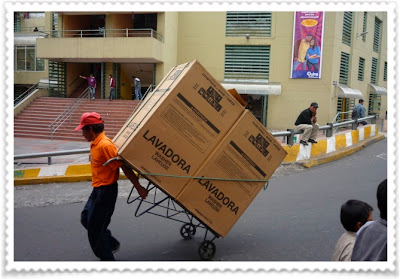 After taking in the sights for a while we worked up an appetite and decided to stop for lunch. We figured that a hotel would be a safe bet, so we came across one that looked very nice. We climbed the marble stairs to the restaurant area and sat down. The waitress handed us menus and we soon realized that the menus were written in Spanish. Feeling daring we decided to go for it and between Bob’s sign language and sound affects we managed to order our meals, but we had absolutely no idea what we had ordered. We did however figure out that it was a three course meal consisting of soup, entree and a  dessert.

It still wasn’t determined what came out on our plates, but it was quite good and the soup was delicious. When the bill came we about fell out of our chairs. The total bill for a three course meal for all four of us including tip came to $11.50. What a deal and we soon figured out the best way to go is to order what the special of the day was.

After lunch we decided to do some more sight seeing around the Plaza. We viewed the Government buildings and watched the local entertainment and even passed by the public library which was absolutely spectacular. The stair case leading to the patio was beautiful and the library was solid glass that looked out onto the street below, very modern looking amongst all of the period details surrounding it. 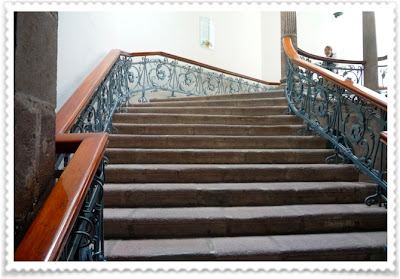 We viewed several breathtaking churches that I can’t even begin to describe the beauty of, but the most impressive church of all was the La Compania Church. It was breathtaking and actually brought tears to my eyes as we walked through the hand carved wooden doors. This particular church was built by several Jesuit priests between 1605 and 1765, inspired by two emblematic Roman Jesuit temples. The central nave is topped by a vault built in brick and pumice stone, and adorned with plaster, polychrome, and mudejar figures in gold leaf. The facade of the church is a baroque work, all carved  on volcanic gray stone. Every space is covered  with the finest engraved motives - flowers, angels, archangels, ecclesiastic symbols and several representative images. It was absolutely one of the most beautiful things I have ever seen. 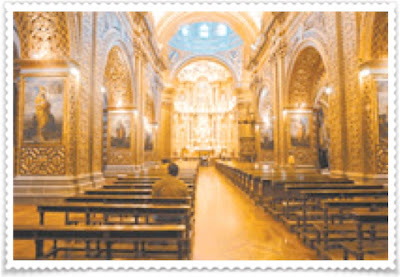 It was getting close to the time to meet our guide, so we headed back to the hotel, only the taxi driver took us to the wrong hotel and we had to call another cab from there to get us back to the correct hotel. Carlos our driver met us a little after 3:00 and explained that he was late because he had gone to another hotel (the first one our cab driver had taken us to) to pick us up only we weren’t there. It turns out that the driver that picked us up at the airport took us to the wrong hotel and we never knew the difference. Both hotels were owned by the same company so that really made it confusing. We decided to transfer to the hotel that we were supposed to be at in the first place especially since we weren’t looking forward to another night in Hooker row. 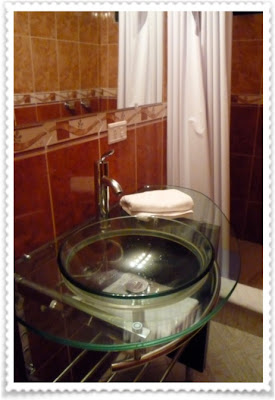 The Very Cool Bathroom In Our New Hotel 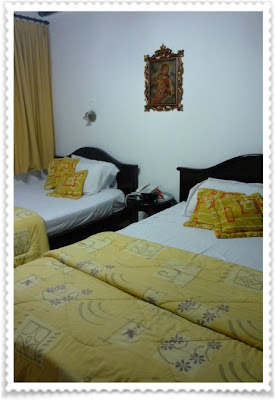 Our Quaint Room
We packed up all of our luggage loaded it into Carlos’s vehicle and headed to the second hotel. This turned out to be a great choice as our second hotel was much nicer than the first and also much quieter. The rooms were lovely and very quaint and the staff was very friendly. 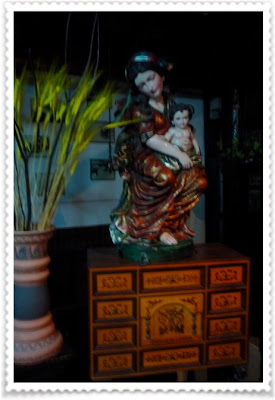 A Beautiful Statue In The Lobby

Carlos then took us for our afternoon tour of Quito. We drove through the most beautiful parts of the city as well as the very poor areas and it was all quite intriguing. Houses were stacked one on top of the other and all different architectural styles. The traffic was unbelievable and the bus fumes were noxious, but the views were breath taking. We drove way up in the hills to see the Virgen de El Panecillo monument. The 45m-high (148-ft.) La Virgen de Quito is an enlarged copy of Bernardo de Lagarda's La Virgen de Quito sculpture that is on display on the main altar in the San Francisco church. The Panecillo stands at about 3,000m (9,840 ft.), so you can also see the sculpture from the center of Quito. 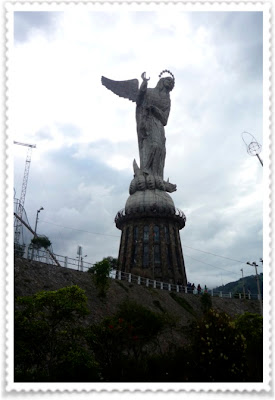 
We then toured the upscale part of Quito. We were amazed at how cosmopolitan this are of Quito was. It was just like being in New York City with all of the high end retail stores and high rise apartments, condos and fine restaurants. I would venture to say you could find anything here that you wanted.

After viewing the sights of the city, Carlos dropped us back at our hotel and we caught a taxi to a restaurant just a couple of blocks away in the heart of the tourist center. We were served a bowl of roasted corn for an appetizer that has fast become one of my favorites and then enjoyed an American meal. We walked back to the hotel in the nice cool evening breeze and enjoyed the perfect ending to the perfect day in a  nice quiet hotel room. 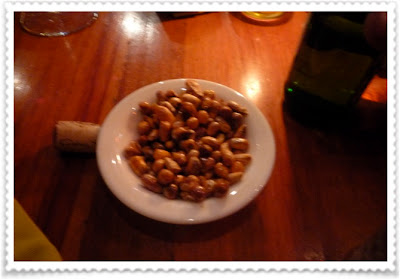 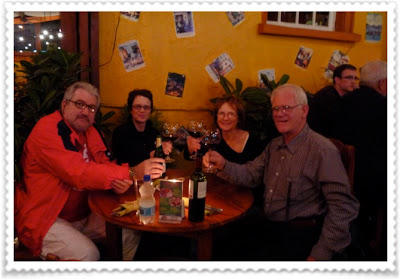 A Perfect End To A Perfect Day