Riding Out The Storm

It has been so long since my last blog that I am sure some of you thought that the Ecuador project had gotten the best of us and we had packed up our bags and headed home licking our wounds all the way. I can’s say that the thought hadn’t crossed our minds a few million times, but in all truthfulness the fact is that a series of events beyond our control prevented me from making any entries for the last two months.

I left off my last entry explaining that Mom and I would be returning to the states leaving Rod in Ecuador to oversee the project. We were at a crucial time and just didn’t feel like we could leave the project at the critical stage that it was in.

Since we had not planned to leave Rod in Ecuador he had no way to stay in contact with the businesses or us once I took my laptop. I knew that I would have to leave it behind and the blog program that I currently use is proprietary to my laptop only, so it would be impossible to write from any other computer.

In the preceding days before Mom and I were to depart we had all agreed that the architects we were working with were not working out at all for us. The business side was a total mess as records of expenses were not being kept up to date and money that we were told was going for supplies and or payroll was actually going elsewhere.

Long story short, after Mom and I  returned to the States a battle began in Ecuador and raged on for a couple of weeks. The city ended up shutting us down for several days. All along we had been told by our architects that they had the permit when in actuality it was nothing more than a verbal from the city. Come to find out, one of the architects had very strong ties with the city (one of the very reasons we chose him) and was able to pull all sorts of strings including shutting us down for the permit we never had anyway. 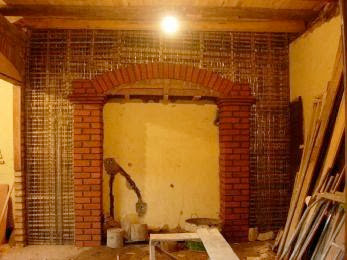 One Of The Many Arches Being Constructed In Our House

In the end everything worked out to our advantage, but there were definitely some tense moments we weren’t sure what the outcome would be. You may remember that when we originally chose these architects, we also considered another architect that we liked equally as well, but felt he did not have the connections to facilitate a speedy permit process (the very thing that ended up getting us in end). 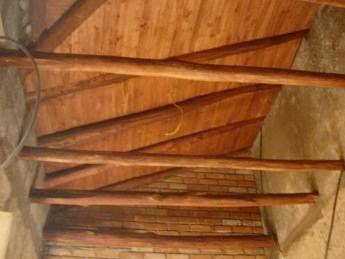 Estevan, the architect that was originally our second choice, offered to help us with our predicament. We ended up hiring him to finish the job. It has been amazing how much smoother the job is now. Everything runs like clockwork and Estevan is very in tune with our different design styles. He has offered up some great design ideas of his own that have been incorporated into the house and we are thrilled with his professionalism.

Best of all, we were told by the former architects that our walls would never be smooth due to the horse manure process that is used on the walls. It turns out our new architect knew of a process that involved no horse manure and allowed for a smooth finish. 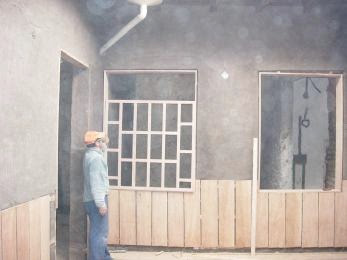 The Smooth Walls We Wanted All Along

One of the biggest obstacles we faced with our previous architects was the vision of the house. A lot of the architectural elements were added to the house through the years and were not original to the design. It was our intention to gut the house and get to the bare bones where we could see the original design, but it was a battle as the original architects wanted to retain as much of the house as is. 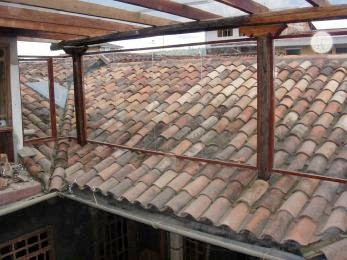 The New Glass Wall On The Terrace Helps Block The Wind

Since we have hired the new architect the house is looking much different now. It has definitely taken on a life of its own. We have retained many of the original elements while adding a few of our own that of course match the style. As Emeril Lagasse says “We have kicked it up a notch”. We have added so many arch ways in our house that we have decided instead of the Arch Bishops house it is now the House of Arches. 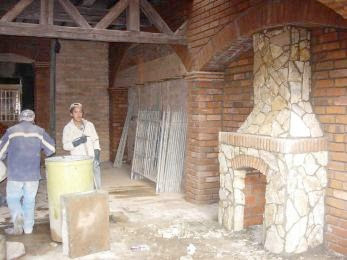 Even The Fireplaces Have Arches

A Most Amazing Man
Rod was all set to return to Huntsville on July the 5th for a couple of months until it was time for us to return to Ecuador for the last stage of the project. This would be when we would pick out all of the finishing touches and the fixtures. Just a couple of weeks before he was scheduled to return home, we got some bad news that his father had been diagnosed with stage three lung cancer. Rod and I decided it would be best for him to fly directly to Houston and stay with Mom & Dad while Dad was having his chemo and radiation treatments.

I am happy to report that Dad is now more than half way through his treatments and is doing astonishingly well. The doctors are amazed. No severe side effects to report and his attitude has remained upbeat through the whole process. Dad is an amazing 80+ year old Cajun man, need I say more. His spirit is strong and he has a love of life unmatched by many. Even with all that is going on, Dad’s appetite is  as healthy as ever and he still does his wood working in his garage most days, something he loves to do.


My Husband and My Laptop Are MIA
During the month of July, Rod was able to return to Huntsville for six days while his sister and niece took over driving Dad to and from his treatments. This has been the longest we have ever been apart and it has definitely been tough, but we’re so happy that we could be there for Mom and Dad.

On July 5th Rod boarded his flight in Guayaquil where he would then catch a connecting flight in Panama to Houston. That evening I received a phone a call from Rod telling me that somewhere between Panama and Houston my laptop had gone missing. When the plane landed in Houston, he got the carry on bag out of the overhead bin and boarded the shuttle to his parents house. Once settled he went to get the laptop out of the bag to show Dad photos of the house, only to realize there was nothing in the bag except for foot powder and some dirty laundry.

I immediately went into panic mode as I knew that our business as well as all of my passwords, personal notes, blog and ebay business was on that laptop. I could just picture some stranger gazing at all of my personal information and the years of work that were stored on my laptop. I immediately called the airlines to file a report and while the agent was trying to assure me that they recover thousands of lost articles a year, I knew deep down in my heart that I was only following the motions and I would most likely never recover my computer.

Needless to say, Rod was in the dog house for several days as I feverishly changed passwords, signed up for identity theft service and tried to keep my fears of the worst at bay. By this point I was hoping that the thief had wiped my hard drive clean. I would much rather this option than the thought that they were hacking into my personal life.

I have learned a lot from this experience and if you have the time, please make sure and read my next blog post as it will deal exclusively with steps you can take to help protect yourself from such an incident. Maybe I can save someone else the headache of losing all of their data. In the meantime I have had to replace my computer.

The Ranch Is Gone
While we were in Ecuador Bob sold the ranch and as soon as Mom returned, they had to get busy packing and preparing for the move. What a job that was! They are now readying themselves for the big move to Ecuador. This will be an adventure in itself as they get ready to pack a container, complete all of the necessary paperwork and make the final move.
at 8:28 AM 3 comments