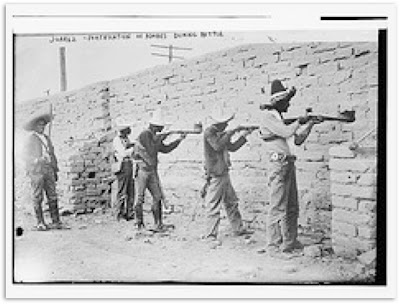 Yesterday didn’t go so well with the architect, so today we were hoping for a better outcome. Rod’s stomach was upset today, although I think it had more to do with the negotiations than the food and we were all feeling battle fatigue.

Last night we had received an email from the previous Architect that we owed him $3,000.00 on top of the $500.00 we had already paid. This was supposedly for work he had already performed. You have got to be kidding me. We had never seen a bill, quote, contract, etc. from this guy and since the wire transfer for the additional $500.00 that we had sent him had not gone through he told us that he had not proceeded. Now he was claiming he had done this and that, obtained permits, etc.

We decided that we had better talk to our attorneys Grace and Nelson to determine what our rights were and to make sure we weren’t breaking any Ecuador laws that could get us into a pile of trouble.

Mom and I did some exploring on our own in the morning and the three of us were to meet with the attorneys late in the afternoon. At 2:00 we all walked up to the Cafe Austria to grab a bite before our meeting with Grace and Nelson. Mom and I ordered the Lentil soup which was absolutely delicious, but Rod’s stomach was to upset and he passed on the lunch.

We were supposed to meet our friends Mick and Kathy for dinner at Tiesto’s tonight, but we decided it would probably be best to reschedule as none of us were feeling that we would be very good company and we were afraid the food was a bit to much for our stomachs. After all when you go to Tiesto’s it’s a dining experience that you really want to enjoy. We called Mick and Kathy and told them we would see them on Sunday for NFL Football and then reschedule Tiesto’s for the following week.

Mom and I decided since Rod was not feeling well that we would meet with the attorneys regarding Marcelo. As we headed back to the hotel we ran into Carlos. Rod once again confirmed that we were standing firm at $12,000.00 with the architect and no more. Carlos quickly put a call into the architect and relayed this message. Now once again we would play the waiting game.

Mom and I dropped Rod at the hotel and headed to the attorney’s office. When we arrived at Grace and Nelson’s we went over our options with Marcelo. Grace explained to us that since there was no binding contract that we were not liable. She said that it works very similar to the U.S. laws. Grace also explained that there was a possibility that Marcelo could possibly try to drag us to court, but it was very unlikely as it would be very costly to him. This was a huge relief and we were anxious to share the news with Rod.

I had turned my cell phone off while we were meeting with Grace and Nelson and on the way back to the hotel I pulled it out of my pack to turn it back on and saw that I had a missed call. I couldn’t tell who had called, but I was hoping it was Carlos with some good news. I hit the redial button and Carlos answered.

I held my breath awaiting the news. Carlos explained that the architect had accepted our offer and that he had made a mistake in the measurements of the roof (hmmm...) Carlos also explained that for this price the roof would be repaired in the best possible way with the wood decking, rubber liner, etc.. After hanging up Mom and I were doing a victory dance in the middle of the street (2 crazy Americans).

We ran back to the hotel to share the news with Rod and decided that we would celebrate with dinner at a restaurant that Chris and Jenny had recommended. They said the food was on the lighter side (good for our tummies) and the owners were very accommodating.

On the way to the restaurant we once again ran into Carlos, the planets must have been aligned. He was on his way to meet with the architect to tell him that we were in agreement with the price, so we hopped in the car and went along.

We met at a french coffee shop on the square and went over the last minute details. The architect explained that his crew would  be starting demolition on Monday morning at 8:00 am (yeah). We all shook hands and headed over to the restaurant.

After a very good dinner we said goodbye to Carlos and started walking back towards the hotel. When we got to the end of the street, we could see that it was blocked off and there seemed to be some sort of procession passing by. People of all ages were walking and holding candles and singing and the Police had a marching band that was playing their instruments.

Once we turned the corner we were able to see that at the front of the procession was a huge statue of the Virgin Mary. She was being carried through the streets and people were throwing rose petals at her. Well as soon as Mom saw all of this excitement she hopped right in to the crowd. I went in after her for fear of losing her and Rod had no choice, but to follow as he was afraid of losing us both. 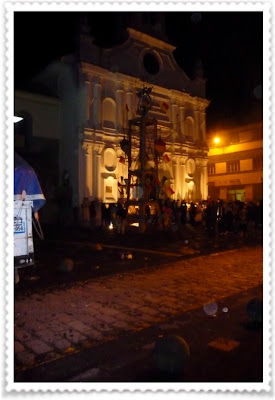 The Church Of Ave Maria

Mom explained that in Santa Fe, they do much the same thing and move the Virgin to another church at a certain time of the year and it was exciting to see the same type of traditions here as well. We followed the Virgin for several blocks before jumping out of the line. Rod said he was trying to keep his eye on us as well as all of his pockets and he just knew in a large crowd like that he was going to get pick pocketed. 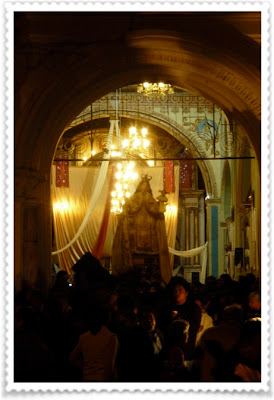 As we headed back to the hotel once again we could see down one of the side streets where they had placed the Virgin in the Ave Maria church. There were people gathered everywhere and fireworks were going off one after the other. Fireworks are very big thing here and you can hear them going off almost daily. 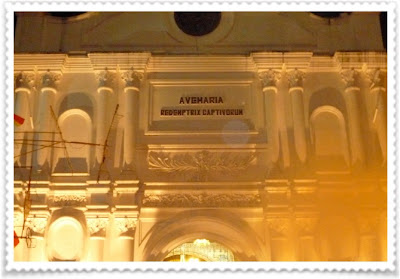 We later learned that the Virgin was brought from another town nearly five hours away. Some people walk more than 10 hours to be a part of this event and it takes a couple of days to get her from her original point to where she stands now. We also learned that each part of Cuenca has a certain saint that they pay homage to and that is why you hear the fireworks all the time as they are celebrating that saint. 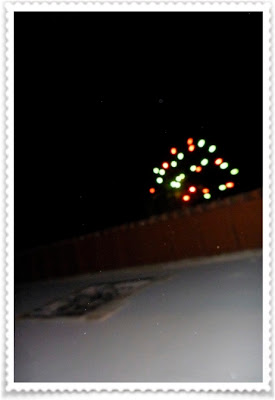