And The Walls Come Tumbling Down 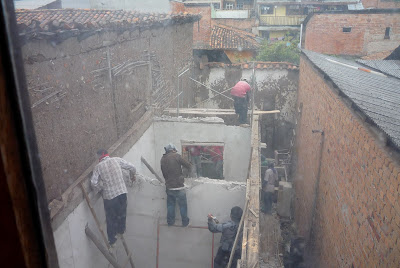 Well it has been a while since I have had a chance to blog and the past three days have been quite exciting. Monday morning the demolition crew showed up on time with their scaffolding and a minimal amount of tools and got right to work.
The crew with the exception of the foreman were all very young. One young man looked no older than 15 while the others all looked to be in their 20’s. It was amazing to watch these young men work. Their first order of business was to demolish the apartments in the back of the house and the only tools they had were hammers, sledge hammers, crow bars and some sort of tool that you use to remove roof shingles. Most of them worked with no gloves, masks or protective eye ware of any type. The foreman was the only one that had proper boots, the rest wore tennis shoes , while one worker even had street shoes on. 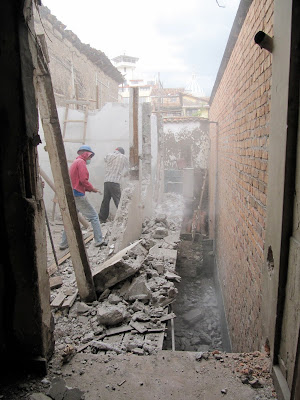 The Apartments Coming Down

Plaster, bricks, roof tiles and beams were coming down at a slow rate as the men climbed up and down their bamboo ladders and rickety scaffolding. As they removed a big heavy beam they would tie one end with rope to keep it from falling down, they would then form an assembly line to slowly pass the beam down to the level below. 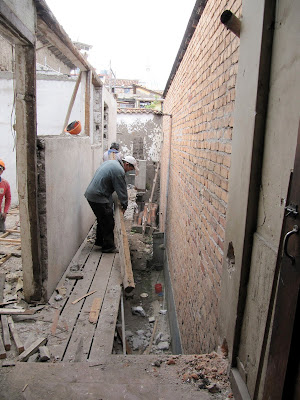 All of the beams had to be carried into the interior of the house, while bricks and roof tiles were neatly stacked in piles for reuse at some later date. Everything else was thrown over the side into an ever growing heap of rubble which would have to be carried out a wheel barrow at a time to a waiting dump truck. We were beginning to think this project was going to take a lot longer than expected, when all of a sudden things started to move very quickly. Within 3 days time the entire back of the house had been ripped out down to the ground. 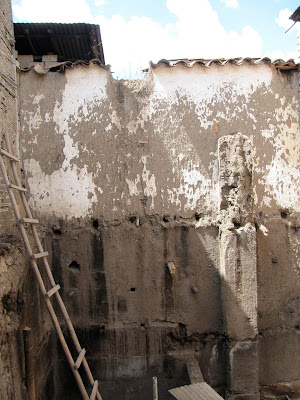 Our Back Courtyard After Everything Was Ripped Out

The young men that are working on our crew are some of the hardest working people we have ever seen. They work from 7:00 in the morning until 5:00 at night and only take home $8.00 a day. They bring their soap and deodorant and a fresh change of clothes with them every morning. At the end of the day the young men wash up in a common sink with no hot water, stripping down to their underwear and washing themselves from head to toe after which they dawn a clean pair of clothes and head out the door looking like they had never swung a hammer. 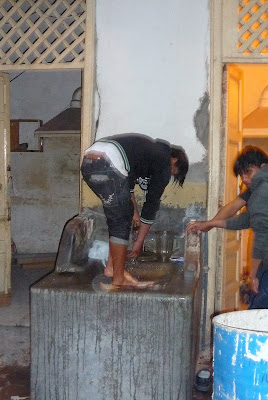 Taking A Bath In The Wash Sink

During the last three days mom and I have been walking the city, exploring every little nook and cranny. One day we must have walked 40 blocks, mostly going in circles, but that evening when it was time to go to dinner we actually begged Rod to call us a cab. We found out where most of the expats have their bank accounts and decided it would be best to open an account here, so we don’t have to carry so much cash when we come. Besides, the current interest rate on a savings account in Cuenca is around 4% and that sounds a lot better than the rates in the U.S.

Today Rod decided Carlos, Mom and I should go to California Kitchen and try one of their burgers as we had heard that they were good. Mom and I decided to pass on the burger as it seems like all we have done since we have been here is eat, so we opted for the salad.

Carlos and Rod both ordered a double cheeseburger and when it came to the table their eyes grew wide. These had to be the biggest burgers we had ever seen. Rod ended up having to take one patty off just so he could fit the burger in his mouth. All of the food was really yummy and Mom and I were lucky enough to be there at just the right time as fresh loaves of banana nut bread had just come out of the oven. 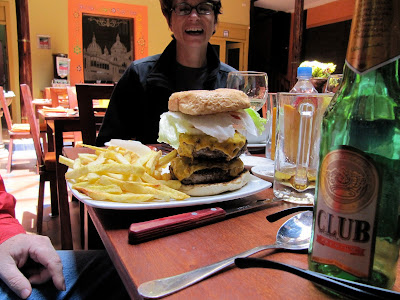 They Need A Warning On Their Menu For This Burger

Tonight we met with the architects and went over our ideas for the house. We are supposed to have our first set of plans by Friday afternoon. There will be a lot of work on their part as they are dealing with four individuals with different personalities and ideas.

After meeting with the architects we went to Tiesto’s to meet Mick, Kathy, Henry and Carlos to celebrate a belated birthday for Mick. The food as always was fabulous and of course the company can’t be beat. Mick and Kathy had us all cracking up over their tales of past travels. We all had a good laugh over our story of our first night in Quito when Rod and Bob wanted to go home almost as soon as we landed. 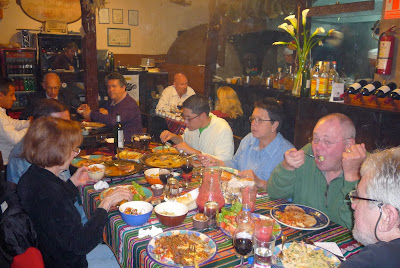 We all decided to meet at La Mansion Alcazar for dinner on Saturday night as we will be leaving for Guayaquil on Sunday morning and catching a flight back to the States on Monday. It will probably be February before we return and we want to squeeze as much as possible into what little time we have left.
at 6:21 PM