Dining At The Funeral Parlor 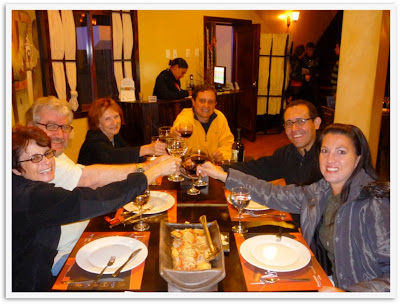 Before we had left the States for Ecuador we learned that it would be Maca & Felipe’s Eleventh anniversary while we were in Ecuador. We had promised them that when we got to Cuenca we would take them to dinner and celebrate, so we made plans to meet with them tonight after we met with the architect.

At 5:00 Carlos, Mom, Rod and I met the architect at the house to get the dreaded quote for the roof repairs. Rod had already pre warned him that we were not going for the original $20,000.00 that he had quoted, so we were hoping that he had thought hard about his quote.

As it turns out the architect must have had selective hearing because now the price for the roof went up a $1,000.00 to a grand total of $21,000.00. What the heck happened? We thought that we had made it perfectly clear that was no where near what we were willing to spend.

Needless to say Rod switched into high gear as he and the architect were going over the costs line by line with Carlos interpreting all the while. Mom and I were trapped in a corner of the courtyard or we would have fled the scene at that moment, but there was no escape and we were forced to witness the whole animated conversation.

Rod would say something, his hands flying through the air in exaggerated gestures like only a true Italian can do and then Carlos would translate into Spanish so the architect could understand. The architect would then laugh or say no no (these words we could understand and they weren’t sounding good) and then he would point to his figures and use some hand gestures as well.

It was almost like watching a tennis game, except in this case much more exciting. Back and forth they went as Rod threw in some pacing for good measure. This was really getting exciting.

In the meantime it began to rain, so water was pouring into our courtyard as the negotiations took place. Mom and I just looked at each other wondering in the back of our minds if we would ever see this place finished in our life times. To make matters worse, as we were sitting there a plane flew right over the house, rattling the windows as it passed over us and Mom said “Oh swell, we must be in a flight pattern.”

After quite a bit of bantering back and forth, Rod told Carlos to tell the architect that $12,000.00 was the most we were going to pay for the roof and that was final. The architect said that he would have to go back and talk to his partner and see what they could do, but we would not hear anything until tomorrow. We left the house wondering if on Monday we would yet again be searching for another architect. We had already spent four days trying to get a quote on the roof repair and we were running out of time.

It was getting late and we needed to meet Maca and Felipe for the anniversary celebration. They were running late so we stopped at a nice place by the river and had some drinks and discussed our meeting with the architect. Each one of us tried to determine what we thought the outcome would be. Rod and Carlos thought we had a chance that he would accept the $12,00.00, but Mom and I weren’t so sure.

A short time later we met Maca and Felipe at the restaurant which was very nicely decorated and we were seated quite quickly as there weren’t to many other patrons dining at the time. Our server passed us our menus and we began to look them over to see what our choices were.

While we were looking over our menus, Maca presented two little pouches to both Mom and Myself. When we opened them we were delighted to see two beautiful dream catcher necklaces that Maca had custom made for us. Maca explained that since we had purchased the property in Cuenca, that was our dream and we were catching it.

We thought this was such a special and meaningful gift, we immediately put them on and agreed that we would need these necklaces, especially in times of negotiation with the architect. 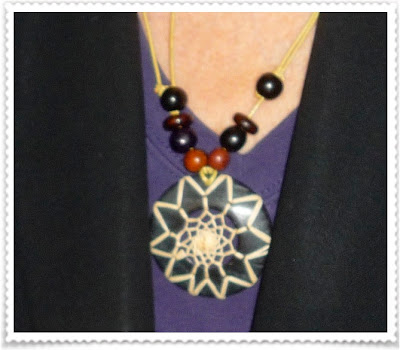 We decided to start our meal with a bottle of wine and while we were placing our wine order, two young people approached our table dressed in black leather and holding some sort of printed material in their hands. The girl began a very fast conversation in Spanish and the hostess began trying to translate so that Mom, Rod & I could understand. 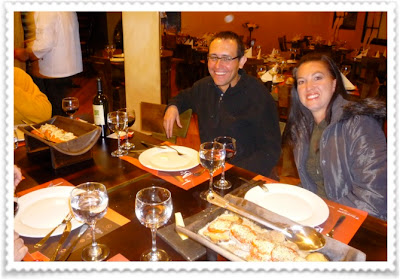 The hostess was having some trouble translating, so Maca jumped in and told us what the girl was talking about. Apparently these two young people worked for the beer company and traveled to a different restaurant every night to inform people about the dangers of drunk driving. They wanted to know if someone in our group would volunteer to be a designated driver. Since I had my stomach issues I would not be drinking any wine, but there is no way I was going to attempt to drive in Cuenca. From the driving I have seen thus far I would probably do better driving if I had been drinking.

The young man and lady were offering some free tickets to some kind of tours, so Maca decided she would be the designated driver for the night. At the end of the meal Maca would be required to take a breathalyzer test to prove that she had not been drinking. This was quite a strange way to begin a anniversary celebration, but we all had a good laugh. 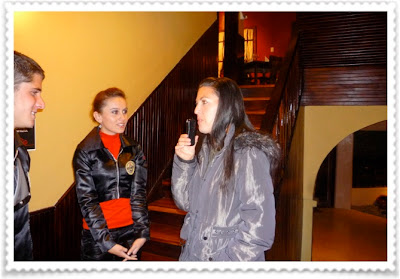 Maca Passes Her Breathalyzer Test
at 11:23 AM