I Became A Travel Agent For A Day 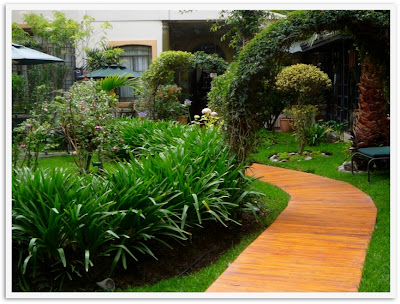 What a great day today was! Rod and I met two lovely couples in the cafe this morning and chatted over a leisurely breakfast. One couple, Ed and Tresa are from Nacogdoches, Texas and are relatively new to Cuenca.  The other couple, Mick and Kathy are in the process of moving here from North Carolina. We really enjoyed talking to both of them and learning some valuable information about shipping your personal belongings over from the States.

After breakfast Carlos was picking us up to give us a tour of the city and show us where the supermarkets, hardware stores, home improvement stores, utility company, banks, etc. were located. Rod was not feeling up to the drive so Carlos and I set off to do some sightseeing on our own. First I asked Carlos to show me a park that I had heard about, El Paraiso. Part of the park was on the river’s edge and had all kinds of walking trails, picnic areas, playgrounds, and a lake, it was absolutely beautiful and will be perfect for Buster and me to take long walks.

After our drive through the park I asked Carlos if we could go look at some hotels in town that had been renovated so I could take pictures and get ideas for our house. We drove to a very busy section of downtown and parked the car and started off on foot to view the hotels. Carlos came up with the idea to tell the hotel staff that I was a travel agent from the U.S. touring Cuenca and looking for hotels to put into my brochures (Yikes!) I asked what if the staff want’s to know who my company is or just wanted to get more information, he said don’t worry about it, so I went along with the plan.

The first place we set out to see was extremely busy so we decided to come back. The next place was next door and the lady that owned it also owned the first place we tried to look at. She was very gracious and allowed us to view her private home which also housed rental rooms for $120.00 a month. The house shared a common kitchen and sitting areas. A lot of young people were staying there I’m sure because of the inexpensive accommodations. 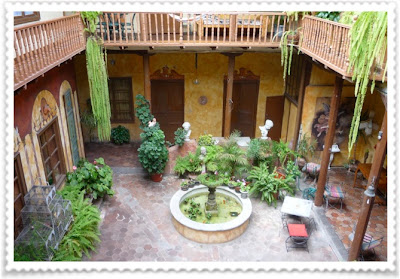 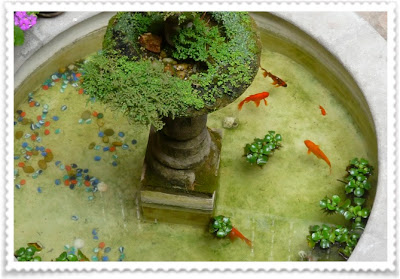 Fish In The Fountain

The house was absolutely beautiful and the woman’s son had done all of the faux painting on the walls, absolutely incredible. The private parts of the house were very formal and full of antiques. The owner showed us all around the house as well as her family photos and heirlooms. Even though she spoke in Spanish I managed to pick up some words here and there while Carlos interpreted the rest. She was such a gracious host and spent a lot of time with us. 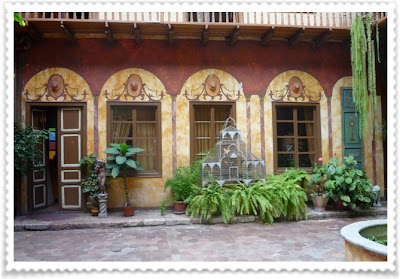 Faux Painting On The Walls 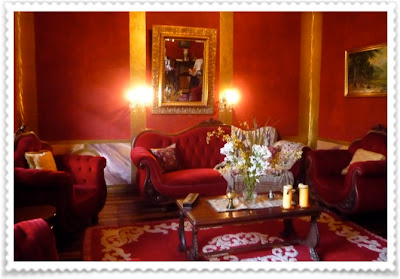 After viewing the first house we looked at several other hotels from the most decadent to the very plain and simple. I was so inspired and couldn’t stop taking pictures. Everyone was so  helpful and only one place asked me for a business card. I acted like I had just given them all out and had none left. One of the Hotels actually gave me a CD with all of their information on it. We were allowed to view the suites as well as some of the rooms at each hotel and take many pictures. 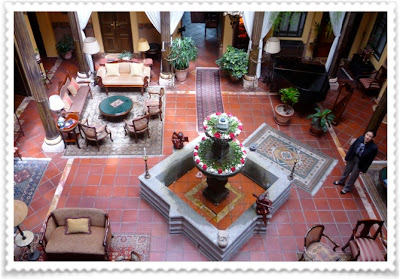 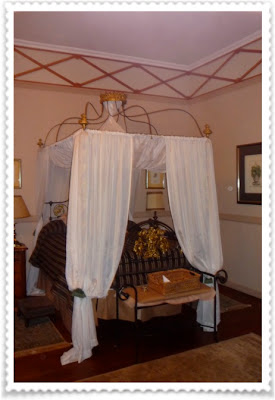 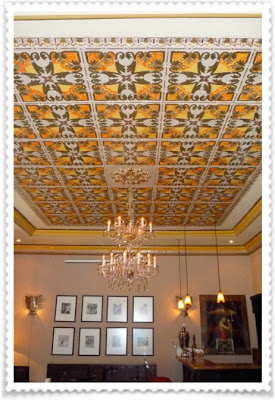 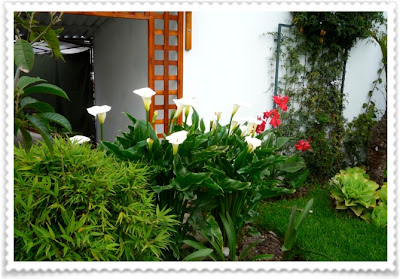 Calla Lillies In The Garden 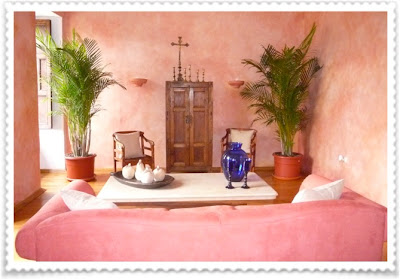 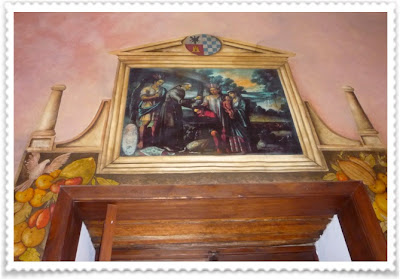 Faux Painting Of A Painting 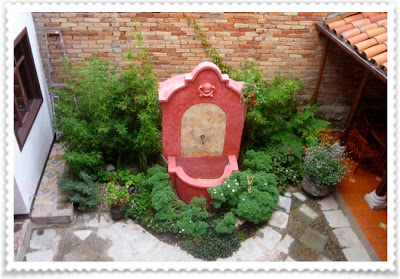 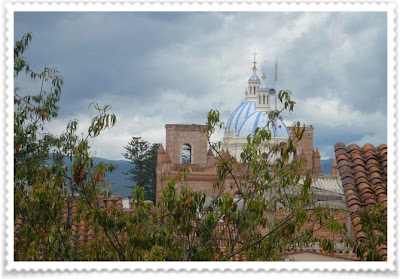 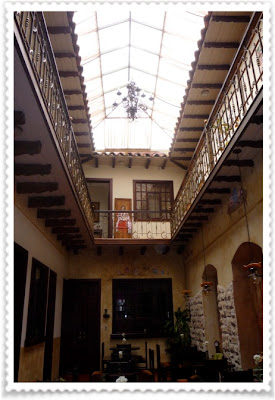 After viewing the Hotels we returned to our hotel to see how Rod was feeling and if  he was up to a little ride around town. We all piled back into the car and headed out for a tour of the city. We stopped at one place that Carlos wanted to show me. It was a private residence perched on the river where for a $1.00 the owner of the house would show you around. The house was filled with expensive antiques from all over the world and the owner had lived there her whole life. She told us what part of the country each item was from including the ceiling panels, draperies, etc. It was an awesome experience. The Ecuadorian people are so friendly. 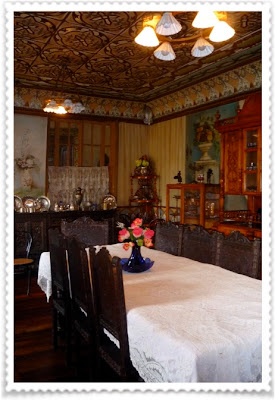 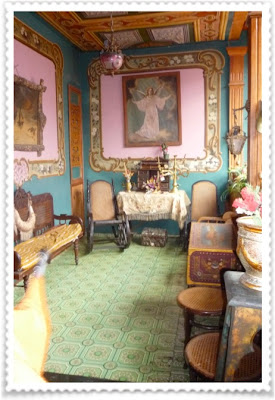 Carlos dropped us back at our hotel where we met up with Chris (one of the owners of the hotel we were staying at). We had promised him a tour of our house, so we headed off in that direction and on the way we met up with Kay and Jim, so they joined us and we all walked to the house together. We warned everybody not to faint when they saw the condition of the house, but to our surprise we were met with oohs and aahs!

Everyone seemed to love the house even though they were well aware of the work involved. Chris fell in love with the huge ferns that were hanging over the courtyard. We decided it would be best to donate the ferns to Chris and Jenny’s hotel because there is no one to take care of them and they would probably be destroyed during the renovation process. 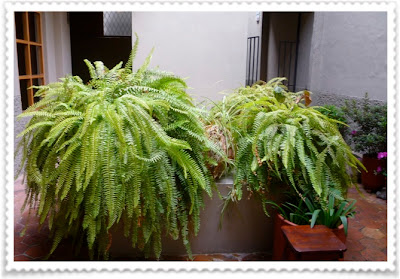 Our Ferns Have A New Home

After returning to the hotel we sat and talked a bit with Jim and Kay and Chris and we bid our farewells to Jim and Kay as they were catching a flight out to Quito that night where they would spend the night and catch another flight the next morning to the States.

After a short rest we decided to walk to the Plaza for some dinner. We had been eyeing a cafe on our previous trips to the Plaza and always noticed that there were a lot of people in there so we decided to give it a try. The name of the cafe was the Raymi Pampa and we were so glad we tried it as the meal was excellent.

I had pan fried trout with french fries and some sort of salad on the side that consisted of crispy bell peppers, tomato, beans, avocado and onion in some sort of citrus marinade. The trout was so fresh and came with lime wedges on the side that I squeezed all over the fish and fries (yummy!)  Rod chose a native ecuadorian dish of a stewed chicken and rice and he was very pleased. I tasted the dish and thought it was delicious, there was a lot of cilantro which really gave it a good flavor. After dinner we went next door to our favorite Gelato shoppe where I had pistachio Gelato and Rod ordered a sundae. 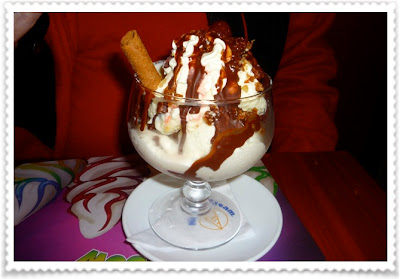 Rod’s Sundae Ooh La La
After dessert we headed back to the hotel to turn in and see what adventures the next day held....Good night.
at 10:17 AM