A Busy Day Ahead Of Us 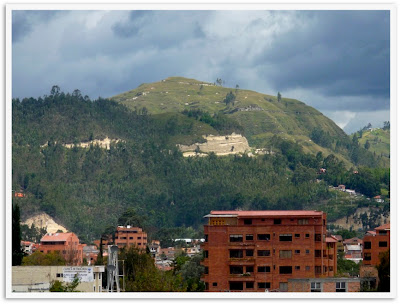 This morning after a delicious breakfast at Bananas, we headed back to our hotel to wait until it was time to meet with Grace and Nelson (our lawyers). On the way back to our hotel we bumped into Clark on the street and stopped and spoke to him for a few minutes. As we headed to our room we ran into Kay and Jim in the Cafe and sat and chatted with them for a while. They were headed off on a big adventure of riding the city buses. They said if they didn’t return by tonight, send out the search party. 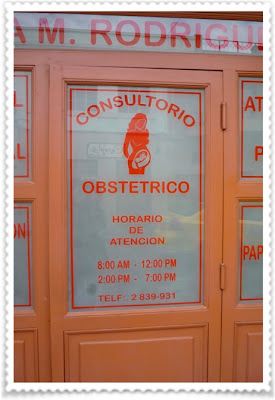 A Funny Door Graphic For An Obstetrician

A short time later we headed to the Lawyer’s office which turns out to be only 2 blocks from the house, how convenient. While we were waiting for our appointment an older gentleman and his wife came in and sat down. I guess we looked like Gringos because he asked if we were from the States. We replied “yes” and come to find out he was originally from Texas and retired here three years ago. Are all the Texans moving here? We asked him how he liked living in Cuenca and he was quick to tell us he hasn’t left since he got here.
We then met with Grace and Nelson and went over the deed, transfer of property, taxes, utilities and Marcelos contract. Nelson doesn’t speak English, but Grace does, so she interpreted everything for us. Property taxes for the year were a whopping $40.00 and telephone, utilities and water run about $80.00 a month, but of course that is because no one lives in the house right now. Everything seemed to be in order and we will pick up our copies on Monday. Grace will also have the architect’s contract ready before we leave on Monday so that we can sign it.

After leaving Nelson and Grace’s office we went to check on the house as if it’s going to look any better. Rod says it keeps looking worse. After a quick run through the house it was back to the hotel, so Rod could lay down a while and nurse his shoulder while I ran the streets again. At least this time I wasn’t carrying laundry.

I went up one side of the street and down the other. I was determined to do a little shopping for some necessities and try out one of the local bakeries. My first stop was a pharmacy where I purchased toothpaste, that went well enough. Then I ventured to a local grocery store (about 4 aisles) and picked up some toiletries without any problems. The cash register actually showed American dollars, so I was grateful for that. 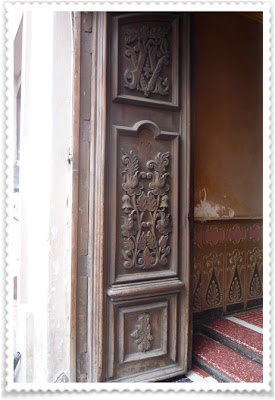 A Very Ornate Door That Caught My Eye 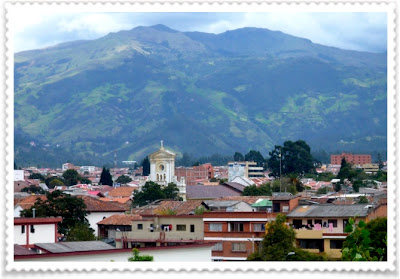 View From The Hillside

My last stop was the bakery, where I purchased two cookies. When I asked how much the shop owner rattled something off in Spanish. I didn’t have a clue, so I pulled out a $5.00, but she didn’t have change. I dug around in my purse briefly for a dollar bill and she shook her head yes. I didn’t know exactly how much the cookies were, but I was happy to spend the $1.00 and headed off down the street. The clerk came running after me and waived me back to her stall. I thought “Oh No did I underpay?” Instead she handed me .75 cents back. What a bargain and the cookies were good to boot. 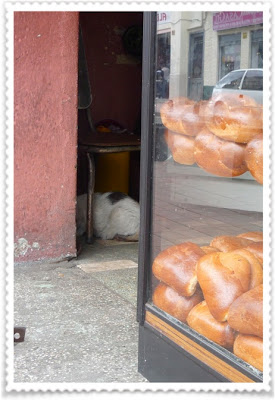 In The Left Corner Of The Bakery Is A Cat
Rod Say’s “A Little Cat Hair With Your Cookie?

As I walked back to the hotel I took in the sights of a typical Friday in Cuenca. A very busy day as old men were getting their haircuts and shaves, street vendors were pedaling there wares up and down the streets and people were doing their shopping at the local market. They even have a virgin statue set up in the market enclosed in glass where you can say a prayer next to the bananas. There was an old man there saying his prayers and he was really talking, either he had been really bad this week or he was blessing his food. I don’t know which. 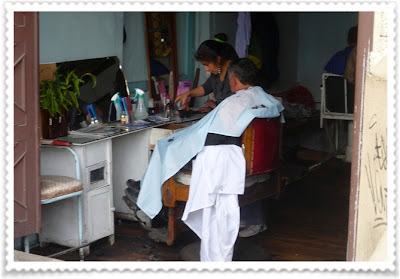 One Of The Locals Getting His Haircut And Shave

After my much needed walk Rod and I went downstairs to the cafe to have a snack. I had a bowl of veggie soup and Rod had a brownie and ice cream. Soon we would meet with Marcelo and Maca.

Our meeting with Marcelo and Maca went well today. We called Mom and Bob on Skype so that they could listen in on the meeting. Marcelo gave us a quote on the roof repair and then we went over some of our ideas and Mom and Bob explained their needs as well. The roof repair was a lot less than we expected, but when we returned home after dinner there was an email from Grace explaining that Marcelo did not agree with the final cost of drawing up the plans as we had understood it. Here we go, just like building in the States, always arguing with the architect, contractor, etc. Rod wrote an email to Marcelo explaining that this was not the price we agreed upon in the beginning and that we were not going to pay it, so now we will have to wait and see (Yikes!)

The Best Burger in Cuenca

For dinner tonight we chose a place that Rod had read about on one of the blogs as having “The Best Burger In Cuenca.” We had to walk down a steep incline and then some stairs down to the river, and then up some stairs to the restaurant. It was just a small wood building perched on the side of the cliff over looking the river.

The establishment was quite small, had a very BoHo decor and Neil Young was playing on the sound system. There were only four tables inside, a bar and a long counter that could be used for seating overlooking the river. There was a small patio outside with some more tables and chairs and there was a larger patio underneath with more tables and chairs that also overlooked the river.

There were only about six items on the menu, but it was in English and the server spoke English as well, so Rod was happy that he knew what he was ordering tonight. We both ordered a burger and fries and two cold beers. When our burgers arrived our eyes grew wide. How did they expect us to fit these monstrous things in our mouths. The burgers themselves were huge and they were piled high with grilled onions, mushrooms and an assortment of peppers, plus I had ordered guacamole to boot. There was a healthy portion of thin cut fried potatoes on the side.

Once we took our fist bite, the flavors just flooded our mouths. There was a hint of  cilantro in the burgers and the bun had been grilled. Add all the grilled veggies on top and a smoky grilled bun and the flavor that was just awesome.  After we finished our meal we paid the bill of $12.00 and that included the beers. I can honestly say that may have been the best burger I have ever eaten.

On our way out we passed by a small patio on the side of the building that connected to the tiny kitchen. I noticed a charcoal grill on the patio where they cooked the burgers and it couldn’t have been bigger than 3’ x 3’, just one of those inexpensive aluminum grills you would pick up at Walmart for about $50.00, too funny.

Back to the hotel to turn in and in the morning Carlos will pick us up for some sightseeing.