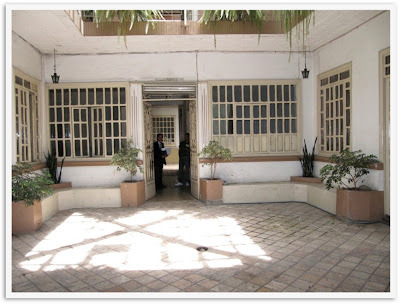 We met Maca, Lucia, Marcelo (the architect) and his two assistants this afternoon at the house. Maca was there to interpret for us and Lucia was there to give us a history of the house. The house was pretty much as I had remembered it, but since Rod had not paid much attention the first time we saw it he was now curled up in the fetal position with his thumb in his mouth.
The house does need a lot of work, but we feel good about the architect we have chosen and we all agree that once restored the house will be a real show stopper. Marcelo and his assistants had done a lot of work on taking the specs of the house and had all of the rooms, walls, ceiling, doors, windows, etc. detailed out for us to see. In Cuenca when you are dealing with a historical property you must  be very concise in every detail in order for the historic commission to review your plans and tell you what you can and can not do.
Our biggest hurdle that we see will be the fact that we can’t always be there to over see the project and we will have to rely on Marcelo and his staff to keep us well informed on a daily basis with photos and whatever means is necessary. Marcelo informed us that this will not be a problem as his reputation is on the line and of course he hopes to get more jobs from us if he does a good job.
After Marcelo and his assistants left, Lucia showed us around the house and gave us a bit of history. The house was actually older than we thought, well at least the bottom half was. The downstairs was built first and the upstairs was added later. Lucia told us that the original part of the house was approximately 200 years old, of course it’s the part that needs the most work. The upstairs was added in the 1930’s and is in much better shape.
The house belonged to Lucia’s Father’s Uncle and once he passed on, Lucia’s Father and his family lived in the house. the Uncle was not an Arch Bishop as we had thought, but rather a priest. We did get his name so I can do some research on him. The house was built on a piece of property that was divided into two sections and another almost identical house was built next to ours. Apparently the original owner and his brother had the two houses built at the same time. Lucia told us that the house next to ours was not in as good a state as ours, but it had more of the original elements in it. We were hoping to see it before we leave in order to determine how our house used to look.
We also learned that Lucia and her 4 siblings grew up in the house. They lived there with their parents and five maids who took care of all of the housework, cooking and watching the children.
After looking at the house Rod and I decided we needed a drink, so we went to Tiesto’s and ordered a wonderful meal. The chef came to our table and he even remembered what we had ordered when we were there in February, which is good because we couldn’t read the menu and we had no idea. Rod had the shrimp and Chef even came out and cut the head off of one and gave it to Rod to eat, he said that was the best part. I told the chef that Rod was Cajun and he knew all about eating shrimp heads. 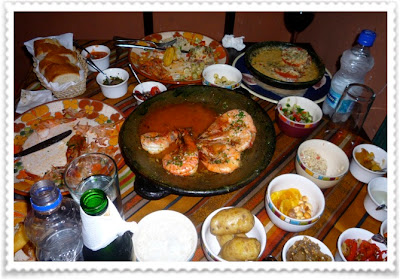 Look At All This Food 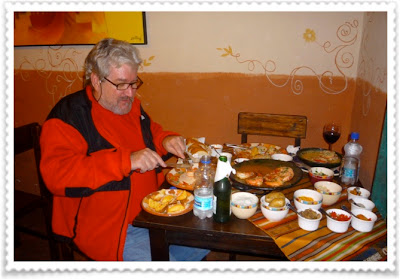 Rod Is Giving It A Good Try

Tomorrow afternoon we will be meeting with Marcelo and hiss staff again to go over some ideas so that they can get started drawing up the plans as it takes nine months to get them approved by the council. Then the real fun begins.