How Safe Is Cuenca, Really? 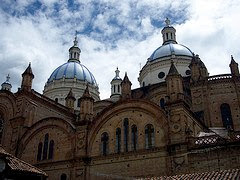 This weeks entry stems from an incident that happened in our home town a couple of days ago. I was sitting in my office when one of our employees came in and told me about a shooting that had happened at the Walmart just down the street from us. I was in shock for two reasons, one, these kind of things don’t happen very often in Huntsville Alabama and two, I had just been at the Walmart the day before doing some shopping. 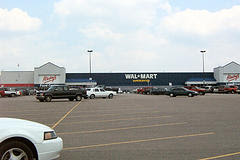 Apparently the shooting was a crime of passion, the shooter killed one person and shot his ex girlfriend, the victims were both employees of Walmart. The shooter then went home and shot himself, he was rushed to a hospital in Birmingham, but was later taken off life support and died. The woman he shot survived and was released from the hospital.

It made me think how times have changed since we moved to Huntsville some 20 + years ago. When we first moved to Alabama the lifestyle was so slow compared to the fast pace that we had left behind in Houston, Texas that we actually hated it for the first couple of years. We were constantly looking for other areas to move to. We looked in Georgia and Tennessee and loved both places, but I guess it wasn’t in the cards for us and eventually we grew to love Huntsville and the surrounding area.

Since we have lived in Huntsville, safety has never been an issue I have worried about. Yes there was the time someone broke into our business and stole the very large gum ball machine (the kind that has a roller coaster type chute, so you can watch your gum ball take a winding ride before being dispensed out of the chute).
The thief was obviously after the change that was in the machine and tripped the alarm once he broke into our building, by the time the police arrived there were gumballs strewn all over the parking lot and needless to say a broken gum ball machine. Too funny, here we had all sorts of computer equipment, tools, parts, etc. and they go after the quarters in the gum ball machine. Whoever said a thief was smart. 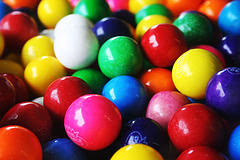 Not to say Huntsville hasn’t had some violent crimes, but generally speaking they are few and far between, and as with any city, you practice common sense and caution. We do lock our doors when we leave the house or our cars (one time Lindsay did forget to lock her car door and her GPS was stolen at a busy shopping center. We don’t walk in unknown areas at night and we are careful who we give our private information to. Other than that it is business as usual.

Huntsville has grown considerably since we moved here. As of 2009 the population in Madison County is 179,653. In 2009 there were 13 murders, 629 assaults and 6,375 thefts. You can read more about Huntsville, Alabama Statistics.

One of the misconceptions about Ecuador is the crime. We find there is a lot of misinformation on the web and that coupled with the fact that many people are unfamiliar with Ecuador leads to the misnomer that there is a lot of crime in Ecuador. I can’t speak for all areas, but I can say that the only crime we have witnessed on our trips to Ecuador was a purse snatching in Quito, actually it was a backpack and fortunately no one was hurt and all the thieves got away with was some freshly laundered clothes. It was our first trip to Ecuador and apparently we were staying in one of the higher crime areas. 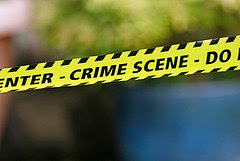 After deciding to write about this subject I immediately went on line to look up some facts about Cuenca since this is where we eventually will be settling. My information was taken from the following website Cuenca Hi Life. According to this website,

Cuenca has one of the lowest rates of serious crime, per capita, in Ecuador (only Loja has a lower rate among cities with populations of more than 100,000), petty and property crime are ongoing problems and rates are increasing. According to 2009 national police statistics, overall crime in Cuenca increased 3% over 2008 and many Cuencanos are demanding increased police protection.

This being said,
Cuenca is safer than almost any city its size in the U.S. if you are considering serious crime and crime involving violence. “If you look at crime statistics, Ecuador has about 30% as many cases, per capita, of murder and aggravated assault. The rate is even lower in Cuenca. So you are statistically safer here from serious harm than in other places.”

Once again the key as in any city is to exercise caution and common sense. According to a former criminologist,

many foreigners are victims of what he calls the “gringo bubble” syndrome. “For some reason, we tend to think that the rules we accept back home don’t apply here. They do. In the U.S. or Canada, most of us understand that spending a lot of time on foot in the central city would put us at risk. Here, because Cuenca has a friendly feel about it, we forget this.” 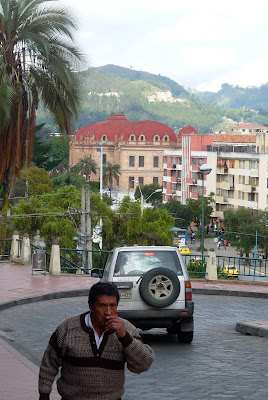 On a closing note as with any city that grows, so will the crime rate. Hopefully it will be a long time before Cuenca realizes the violent crimes that we experience in the U.S. although I suspect one day Cuenca will also see the consequences of increased crime as more and more people are moving in.

Repairs continue on the house in Cuenca and everything seems to be moving along quite nicely.

I did receive a very funny email from Sebastian, one of our architects that I felt inclined to share,

“Regarding to your house, the work is due to start again tomorrow since during the last bank holiday ("Fiestas de Cuenca", 1st-3rd of November), people did not work at all and on Thursday 4th and Friday 5th, we decided not to make them work either because the workers, most of them, drink a lot during those days and, therefore, they spent the rest of the week so lazy or very hangover and do not work properly.

During last week, the weather has been so terrible, that is why the work had to be stopped, this is because it turns to be very risky for our people as the new surface (chova) becomes very slippery to keep going with the tiles.
Also, we ran out of the old tiles and ordered new ones (old appearance ones obviously) which will be delivered to us tomorrow morning.

Despite all these problems, the whole roof has already been fixed to avoid water from getting in. So, do not worry, all the ceiling is now protected and will not be damaged any more. And, hopefully, the work should be finished by this week as promised.

I hope you understand all these problems that we always expect such as rainny days, bank holidays, etc”.

I found this email very curious, interesting how the labor issues parallel that of the States. Being business owners we can totally relate to the situation. Now that the roof is finished we will start on the next phase of our project. The immediate need is for new sky lites over the courtyards. Right now we have two gaping holes in the middle of our roof with rain pouring in. 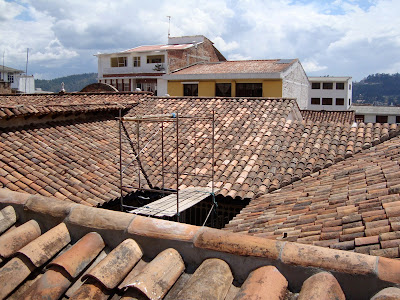 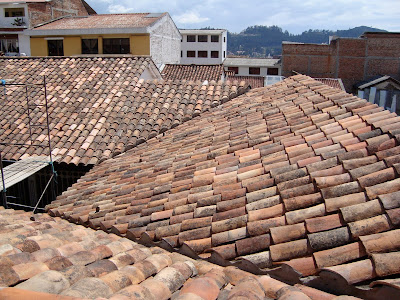 The quotes for the sky lites came in from the architects, but they were quite high. We have asked Carlos to help us get some additional bids on the work. We suspect there will be times that we will have to hire outside labor to keep our costs in line. After building and remodeling several houses in the States this is something we are used to. 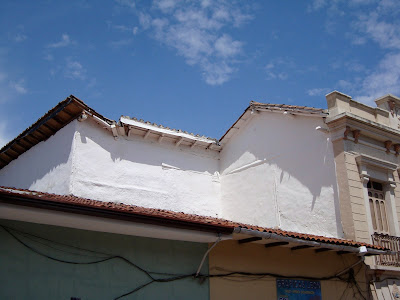 The last set of photos that sebastian sent of the repairs we noticed that the exterior walls that had been repaired looked very wavy and bumpy. When we asked him about this he explained that they had not finished the walls due to the fact that they had run out of "guano de caballo", which is horse manure, and was very difficult to get a bit more due to its slow process to be produced, which means one of two things, either the horses are not doing their job or horse poop is a hot commodity right now. Sebastian has promised to repair the walls with the next stage of the work.