There Are Always Two Sides To A Coin 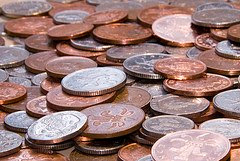 It seems that we are being reminded of this very old, but wise adage on a daily basis now. The last couple of weeks have proved to be quite difficult in communicating with our architects and making them understand what we expect. At one point tempers flared so badly on both sides that all parties involved were ready to throw in the towel and severe the relationship leaving us to start over from zero once again.

The architects were at the end of their rope and likewise we had made up our minds that we would go it on our own, with the help of Carlos of course. We would hire contractors, laborers and carpenters at our own discretion and be in charge of buying the building material ourselves. The relationship had by now become to strained and to stressful for all of us and the frustration level was at its peak. 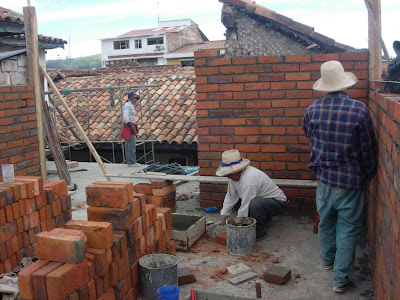 Working On The Terrace

After everyone vented and the waters began to recede. I had time to try and look at the situation from both sides. From the very beginning we have been frustrated at the unwillingness of whoever we are dealing with on the house remodel to give us a firm commitment. It has always been understood that all estimates were just that and we never expected that a bid that was given to us would include unforeseen circumstances. 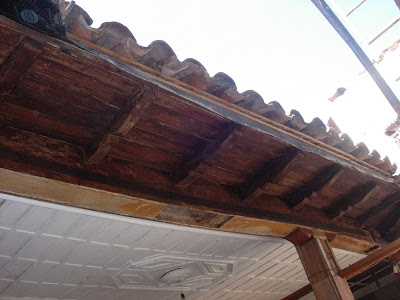 The Canasillos Under Our Roof

We knew that when the workers opened up the roof, if there were rotted beams that needed to be replaced that would be above and beyond the original price. We also knew that any changes we made to the plans would equal out to more money. I don’t know why it works differently in Ecuador, but it does and getting even a ball park estimate is like pulling teeth or at least that has been our experience thus far. 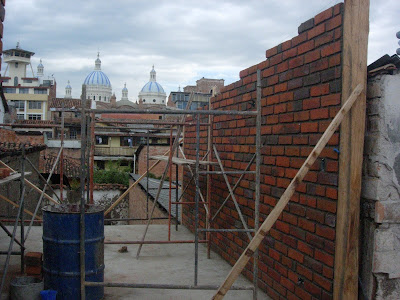 The Terrace Walls Going Up

Now for the work that is exact, such as installing the glass roofs, we then of course expect a firm price barring any changes on our part. In our minds the contractor should be able to take his measurements, know how much material he will need and his labor costs and be able to give us a firm price. This however has not been the case and we are constantly being asked for more money midway through the project, because something was measured wrong or more materials had to be purchased than originally quoted. 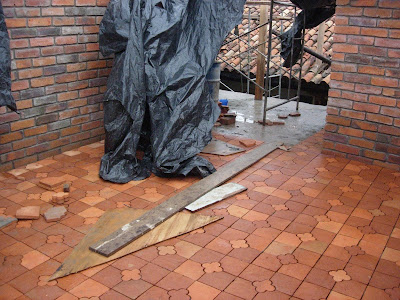 The Terrace Floor. What A Beautiful Tile Job

This way of doing business is something that we are not used to, but apparently from what I have read and am currently experiencing is quite common in Ecuador. Nobody wants to take the blame for their errors and will deny what they originally stated in their quote. We are constantly being told that “No that wasn’t included in the price.” 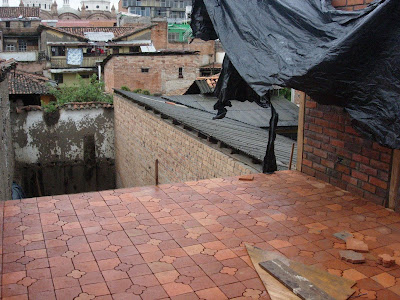 Another View Of The Tile Floor

The architects see it in a very different light. Our architects are a Father Son team, one being very experienced with very good connections. The other, fresh out of Architectural school, full of ideas and ready to sink his teeth into a good project. The Father having years of experience and working on many important projects for the City, brings to the table his own ideas about how things need to be done and a high regard for the original style of the structure. 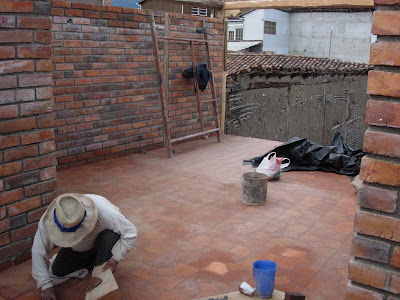 The Tiles Being Grouted In

Sebastian, the Son doesn’t have a lot of experience under his belt, but he is attentive to our wishes and full of fresh ideas. It is our intention to preserve many of the architectural features and the facade of the house, but there are certain elements that we want to change and we need someone that is willing to see our vision while guiding us along the way. 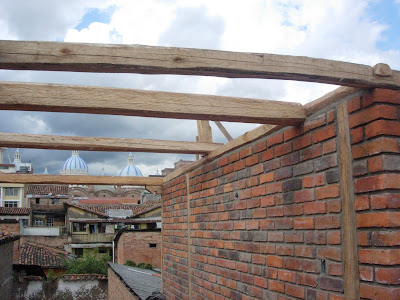 Rod is our appointed spokesperson/project manager and is doing his best to keep on top of the project via emails, Skype and photos, but the stress is definitely taking its toll and the past two weeks have reflected everyones impatience and frustration. None of us are at our best lately and the tension has gotten the best of us. 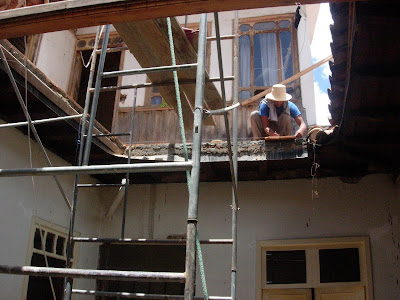 We have also come to realize that a big part of the problem probably lies in the fact that we don’t speak the language. Yes we have Carlos to translate, but a lot of the nuances are lost in translation therefor resulting in a lot of miscommunication and or misunderstandings. I say just chalk it up to the two sides of the coin theory. 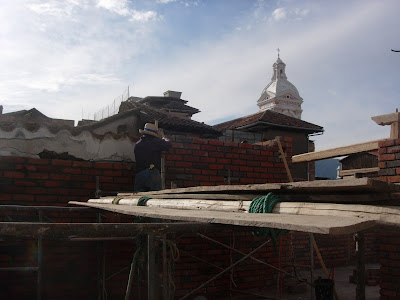 A Wonderful View Of The Church From The Terrace

In light of all the turmoil, surprisingly this has been a very productive week. Our terrace is almost complete and the workers have done a beautiful job on the brick and tile work. The crew that we have is fantastic and thus far has done a very professional  job. Of course the Terrace has now cost us almost seven times the original quote, but who’s counting? 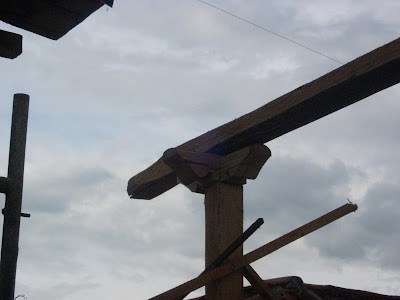 Next is the glass roof that goes over the courtyard. The frame has been built and the glass is ready to be installed. This particular contractor we hired ourselves and it turns out to be a bad decision on our part. This is one of those cases where something was measured wrong and the original quote shot up quite a bit. We’re holding our ground on this one and the contractor has agreed to finish the work for the original price he quoted, but not without a big argument ensuing with Carlos.

On top of everything else we received pictures last night showing the structure for the glass roof along with broken clay roof tiles around the base of the structure. Apparently the crew walked on our new tile roof without putting anything down to protect it and broke many of our new tiles. Rod has officially gone Postal now and I watch helplessly as the steam rises from his ears and he has a meltdown. 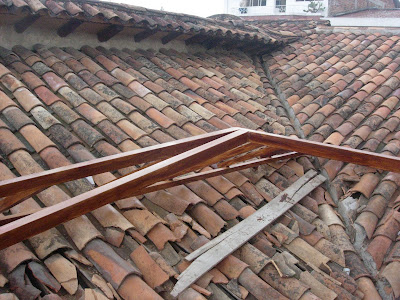 Our Newly Laid Roof Tiles Crushed By The Glass Man

There is a hopefully happy ending to this weeks saga though. It looks like we may have worked our differences out with our architects. It seems Sebastian’s Father may be moving to Quito to work on some projects and he has given Sebastian his blessing to take our project over and work with us. We are extremely happy to hear this news as we have always felt that Sebastian really understood our ideas and expectations as well as our desire to make this property something unique.

It is our hope that together we can see this project through to the end. One day Sebastian can tell his Grandchildren about the project he did for the Crazy Gringo’s and how he survived. That ought to be quite a story. Something tells me we will have many stories to share.
at 5:53 PM