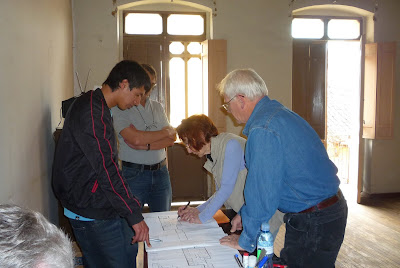 Well here we are back in Ecuador and some major plans have changed. Hopefully we will be able to tie up loose ends with the architects and finally get a plan in place. The four of us departed Huntsville on Thursday morning and due to a strong headwind barely made our connecting flight in Houston. We then flew to Quito where we were to spend the night before making the short flight the next morning to Cuenca. We didn’t actually get to our hotel until just before midnight and then we had to leave at 6:00 in the morning to catch our 7:15 flight to Cuenca. 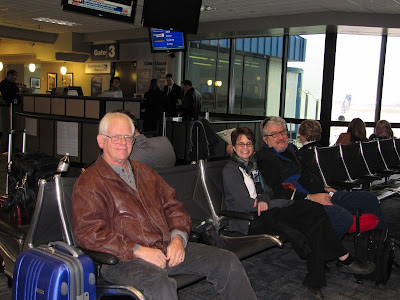 Waiting To Catch Our Flight To Houston

I was a little nervous about our accommodations in Quito as I still remembered the first trip and our run in with the “Ladies of the Night”. This time I had made reservations at the Radisson and was very relieved when the hotel drivers met us at the airport. When I had originally booked the hotel room I just went with the basic room (two twin beds at the rate of $75.00 a night). I figured that we were only going to be there a few hours so we might as well save money where we could. Much to my surprise, we discovered we had a suite complete with a living room, 1 1/2 baths and a king size bed. I still don’t know how all that transpired, but I sure wasn’t about to complain. The beds were very comfy and the rooms clean. My only complaint was that our room was situated above a very busy street, so it was rather noisy

The next morning after a short flight to Cuenca, we headed to the apartment that we had rented for our stay. We had decided to stay in one place this time as opposed to moving around like we did the last time. We had rented the apartment from Rich and Nancy who are also expats and now call Cuenca home. Rich and Nancy have renovated four places and rent them out. After reviewing the rates we decided that this would be the perfect option for us for such a long stay. Even though you can stay relatively cheap at the hotels it does add up after three weeks, especially for two couples. 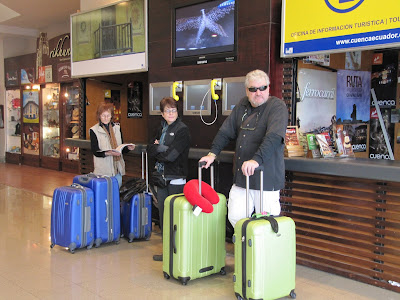 The apartment we are staying in is new construction and designed with all of the modern amenities you could want. The kitchen is fully appointed with granite counter tops, stainless steel appliances, eat in bar, island and a gorgeous view. The living room is very comfortable with tile floors, cable T.V. and a dining area. The bathrooms are equally as nice and we have a washer and dryer, Wi-Fi, and very comfortable bedrooms with plenty of closet space and a safe. The best part is the huge wrap around terrace that offers a panoramic view of the city as well as the mountains. 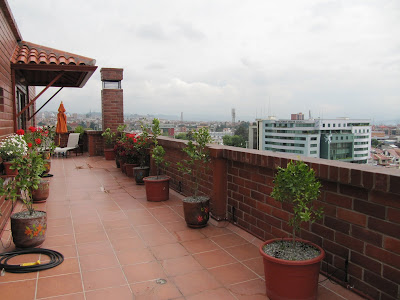 Views From The Apartment Where We Are Staying 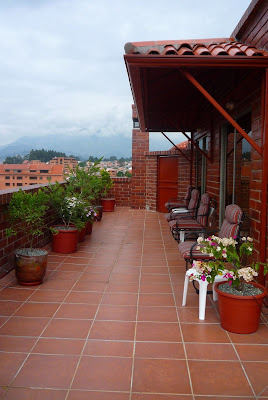 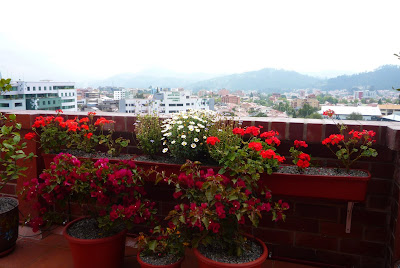 Beautiful Flowers On Our Patio. Mom & I Can’t Wait To Plant Our Courtyard 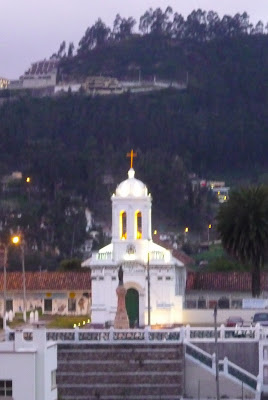 A View Of The Church From Our Bedroom Window

After Rich gave us the grand tour and explained how everything worked we got unpacked and settled in. Carlos then came to pick us up and we decided to go look at the house and give Bob the shock of his life. I have to admit it was pretty shocking to all of us. Everything looked pretty much the same except for the two gaping holes in our roof where the skylights once were. To our relief we did see that the glass block had been taken out of the upper floor under the second skylight. There were sheets of black plastic that funneled the rain water to the stone courtyard below. One of our biggest fears had been that rain was pouring through the hole where the skylight had once been onto our wooden floors on the second floor. Needless to say we were quite relieved to see that this was not the case. 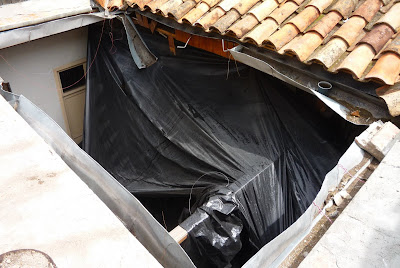 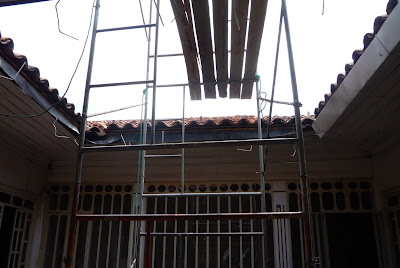 Anyone Need An Umbrella 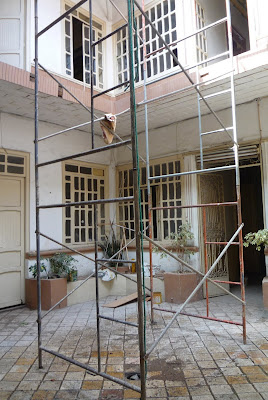 Much to our horror though, Mom and I discovered that the top piece of the alter that sat in the chapel on the roof had was missing. This was the alter that we had fought so hard for when the house was purchased because we truly believed that it belonged with the house and was a part of the history. This would definitely be brought up at the meeting with the architects the next day. 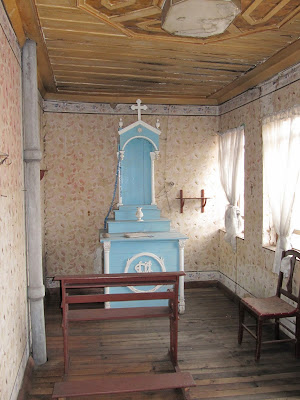 Unfortunately we still have water issues and we could see where the water had been running down some of the interior walls and causing damage. We would be meeting with the architects tomorrow morning to discuss our next move and to try and get a rough estimate of the cost of the project to see if we could even move forward with them. As Rod said “We may have the cadillac of architects, but budget may only allow for a Toyota”. After we all got over the shock of seeing the house as it was, we decided to go to lunch at one of our favorite restaurants and discuss our next move. After a good lunch we had Carlos take us to our favorite bakery to pick up some cookies and then on to the Super Maxi grocery store to pick up a few necessities. It had been a long day and we were extremely tired, so we bid Carlos goodbye and stayed in for the night where we continued our discussion about the house. Now that Bob had seen the house for the first time since we had purchased it, we decided we had better put our heads together and make sure we were all on the same page. 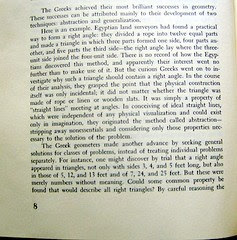 Bob told us now that he had seen the house he was not at all happy with the layout that Mom, Rod and I had put together the last time we were down. Bob was concerned that the space for he and my mother was to small, so back to the drawing board we went. Mom and Bob ended up changing their plans to better suit their needs and came up with the idea to utilize one side of the the upstairs and downstairs of the house for their personal residence so that they could have more room. Rod and I ended up taking the other side of the upstairs of the house, but pretty much left it the same as the original plans. We are already used to living in a small space and decided that the common areas such as the kitchen and patios is where we would be spending most of our time anyway.
The four of us decided that for now we would leave the remaining rooms downstairs for family and friends when they come to visit.We would make a decision at a later date if we would actually pursue the rental idea. Bob came up with a plan to sell the ranch house in Texas and liquidate some of his property quickly in order to put the house project on the fast track so that he and Mom can start their life in Cuenca quicker.
The next morning Carlos met us at the apartment and drove us to the house to meet with the architects. We would go over the plans and hopefully get a ball park figure of what this house renovation was going to cost us so that we could put together a budget and decide the best way to proceed. After Rod and Bob (with Carlos interpreting) did their best to explain to the architects how things proceeded in the States on a renovation project, the architects finally agreed to get us a rough in quote by Wednesday. We brought up the missing alter piece and the architects assured us they would either find it for us or build us a new one, we were hoping of course that they would find it.

Rod Decides He Doesn’t Need A Beignet
While Mom and Bob went over the changes that they had made to the plans with the architects, Rod and I hurried to our side of the house to our newly inherited space to try to come up with any ideas that we could put to paper. This would give the architects a better idea of what our needs were. We walked into the very tiny bathroom and were discussing the best placements of fixtures and what we could and couldn’t live without in order to make it seem bigger. I offered up the suggestion that I didn’t need a bathtub and instead a shower would be fine. Rod immediately pointed to the only remaining fixture in the bathroom which happened to be a bidet and said “Well I don’t need a beignet”. I burst out laughing and when I explained the difference Rod reminded me that he would never be able to learn Spanish as he can’t even speak the English language. 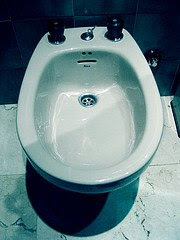 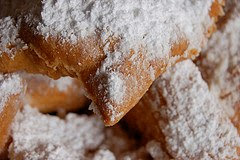